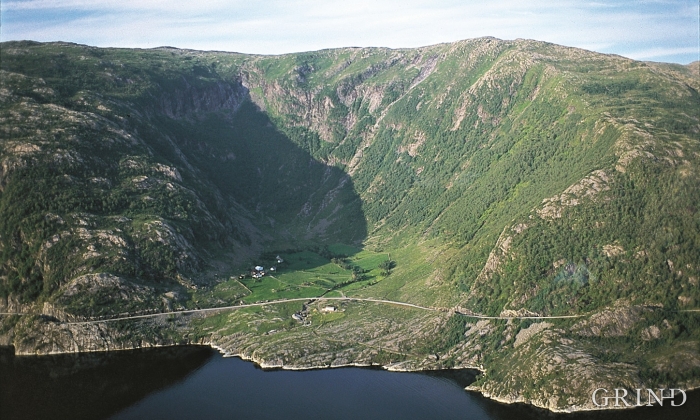 Cirque in Dyrdal in Lindås, an arm of a fjord in the distant past? (Svein Nord)

FROM CIRQUE TO FJORD

If you journey along Austfjorden, you at the same time turn the pages of time back through Ice Age history. The landforms show how the landscape has developed gradually as the glaciers have grown - and melted again - in several episodes: from small cirques, we see innermost at Dyrdal, to larger fjords, like at Mas fjord further out.

Before the Ice Age, there were valleys that were carved out by rivers where there now are fjords (a on the drawing). The fjords are the work of the glaciers - it is only they who have the power to chisel away at the landscape under the ocean surface.

About a million years ago, the first glaciers reached all the way out to the coast. Furthest out, they first carved small cirques and depressions in the old river valleys. As time passed and the carving work continued, the ice scoured also below sea-level. When the glacier then melted back, the sea followed after, inward over the carved-out bedrock. In this way, the first small fjords were created where there previously had been valleys (b). For each ice age that followed, the cirques and fjords were carved further and further in over the land.

From the outflow of Mas Fjord and into Aust Fjord, the fjords and bays got steadily smaller. The cirques at Dyrdal and by Odnåsen furthest in are still not carved deeply enough to be under sealevel. This shows that the glaciers over many ice ages first carved Fens Fjord and then Aust Fjord further and further inland (c). This shows also that Kikallevågen, Søre and Nordre Kvingevågen, and even Mas Fjord, first have been cirques, like that at Dyrdal today. Theoretically, we need only the return of an ice age before the Lindås peninsula becomes flooded into an island. When this area later had to become liveable for sea-folk a bridge connection eventually had to be built in the Ostereidet- Bjørsvik-area. Of today's European Highway along Oster Fjord, it is the Eikefet tunnel portion of road that would remain longest if the glaciers got the chance to come back.

Why was Mas Fjord so much larger than the bays further in along the fjord? That the fjord lies farther out, and as such is older, perhaps helps explain a bit. But, if we try to reconstruct the river valleys from before the ice ages, we find that "Mas Fjord River" was much larger than the smaller rivers further to the southeast. The river that ran where the crooked fjord goes today started far in in Stølsheimen, as two relatively large (that which today are Matreselva and Haugsdalselva rivers) and several smaller rivers. When the ice ages set in, powerful glacial streams were created that followed the old river beds. As the glacial streams eventually merged, this work went more quickly and carved deeper - until it reached far under sealevel. And when the glacier in the end calved back, Mas Fjord followed after.

In the mountains above Aust Fjord, one finds one of the westernmost populations of Snow Bunting in the country. Here, the species lives amidst the most sparse block fields. The Snow Bunting is the bird species in our fauna. that is found highest up in the mountains. 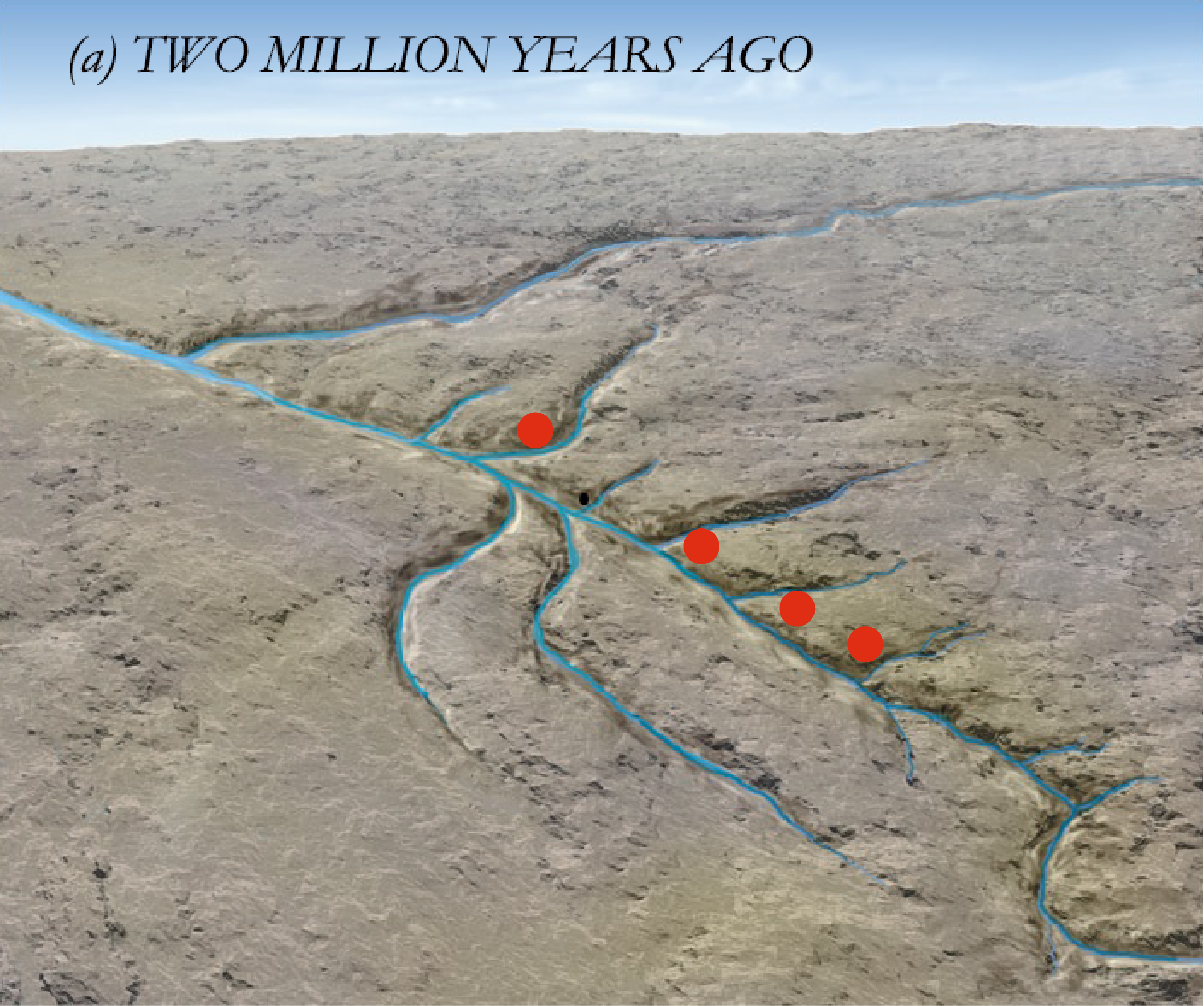 (a) Phases in the development of the landscape around Fens Fjord and Aust Fjord: Two million years ago (Inge Aarseth/Kjell Helge Sjøstrøm/Masaoki Adachi) 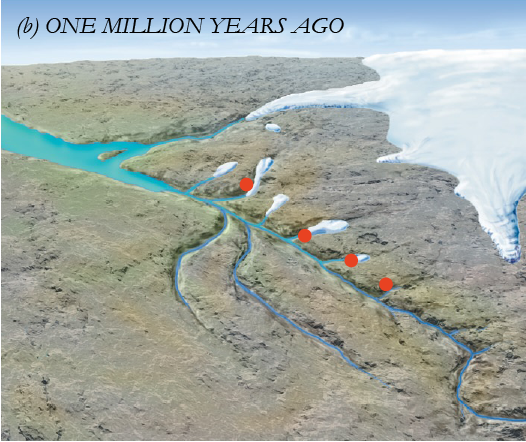 (b) Phases in the development of the landscape around Fens Fjord and Aust Fjord: One million years ago. In phases b and c the glacial meltwater coloured the fjord turquoise. (Inge Aarseth/Kjell Helge Sjøstrøm/Masaoki Adachi) 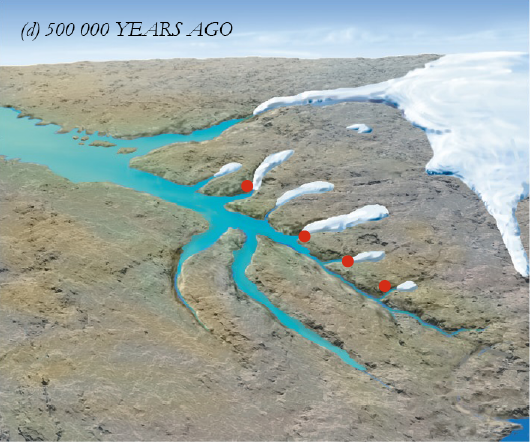 (c) Phases in the development of the landscape around Fens Fjord and Aust Fjord: 500 000 years ago. In phases b and c the glacial meltwater coloured the fjord turquoise. (Inge Aarseth/Kjell Helge Sjøstrøm/Masaoki Adachi) 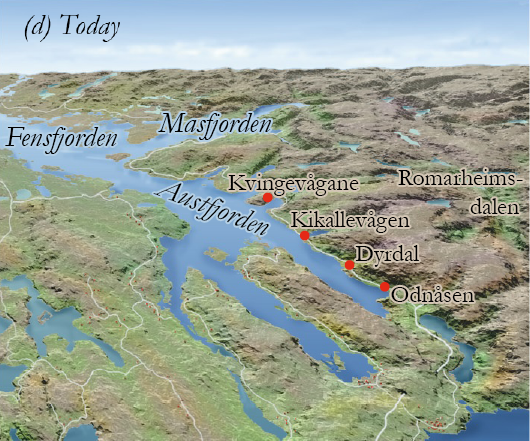