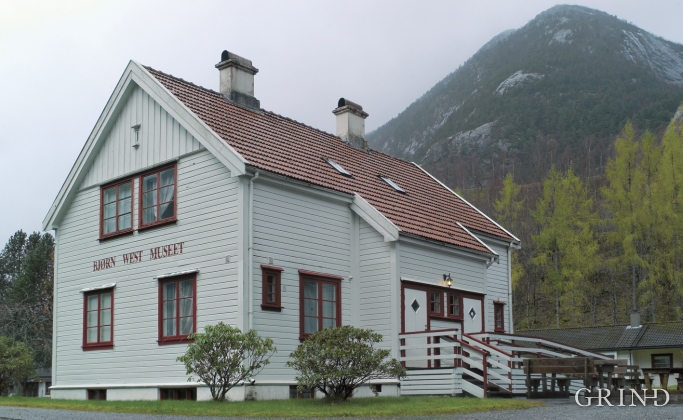 The Bjørn West museum is today located in a building in the centre of the small coastal community of Matre. The building was erected to house administrative personnel of A/S Matrefaldene in 1912. When the German occupying power arrived at Matre in 1941 they started taking out sand here to build defence works out by the coast. Here was a work camp with 200 Russian prisoners of war and 30 prison guards. The Germans requisitioned the two administrative houses of A/S Matrefaldene. Their commander, marine lieutenant Karl Wagner and the prison guards lived here. Wagner was sentenced as a war criminal in 1946 and spent many years in Bergenhus. In the building, which now houses the Bjørn West museum, the Germans had a guard post. People from the farms Stordalen and Fosse had to pass here on their way to Matre, and much of the supplies to Bjørn West were transported past this checkpoint.

The resistance group Bjørn West had their headquarters in the steep Matre mountains towards the end of WWII; an endeavour that has earned its central place in the Norwegian history of occupation. In October 1944 people from “Kompani Linge” came over from England to establish a division behind enemy lines. Many young people joined this resistance group to fight against Nazism and occupation. For most part of the winter of 1944/45 Bjørn West stayed in the mountains southwest of Masfjorden, between Andviki and Stussdalssetret. Following a German attack on 8 April 1945, the entire force of around 250 men was gathered in the mountains east of Matre, with headquarters in Stordalen mountain lodge. Most of them came from Nordhordland, Sogn and the Bergen region. On the last days of war at the beginning of May there were skirmishes between Bjørn West and the German forces. More than 100 men lost their lives in these battles. On 5 May 1945 the Germans burned all the mountain huts where Bjørn West had held house. They also burned all the houses in Kringlebotnen and Stordalen. Three days later, on 8 May 1945, the war was over. The German capitulation was a reality.