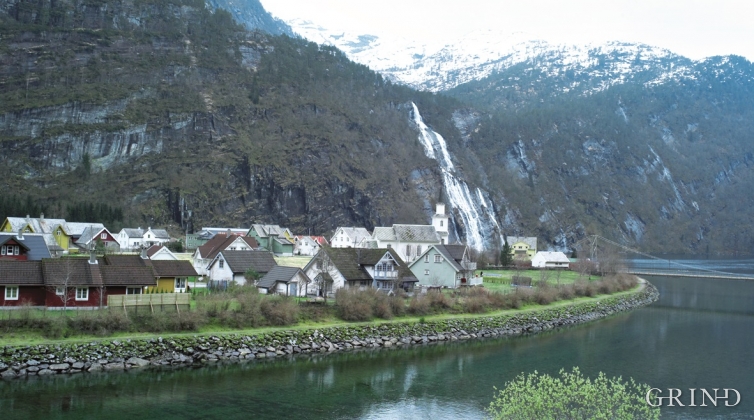 The farms in Modalen are situated on old, fertile sediment beds from the river or the sea – between Mofjorden and Steinslandvatnet. As far back as the Middle Ages Mo has been a church location for the valley and the farms above.

Mo in Tysnin (Mofjorden) was a separate parish before 1350. And old road from Voss passes in front of the farm Farestveit and Mo was strategically placed between the up-country settlements and the sea route. Following the Black Death Modalen was included in Hamre parish. During the decline in late Middle Ages many churches were closed and several parishes were merged to one parish, with one or two priests for a large area where previously there had been between six and eight.

Before the parish was split, the Modal people had a long way to go to have their children christened; first some 20 km down the valley and to sea, then 40 km in an open boat to Hamre. Sources give an account of a pair of twins who were born on the first Saturday in February 1711. The following day the parents took their children to Romarheim, acquired a boat and oarsmen, rowed to Litle-Urdal to collect godparents and then on to Hamre church, in the middle of the deepest winter, to have their children christened.

People came from both Modalen and Eksingedalen when they were going to church or town. Before the road was built to Eidslandet, the people from Eksingedal had a strenuous trip across the mountain, from Flatekval to Farestveit or from Høvik to Krossdal, to get on to the town road. The sale of wood to Bergen was an important source of income. The valley folk transported the timber down the river and brought it on land at Mo where it was sawn and split. Every farm had its fixed place to do this and the rent to the landowners was paid in timber. Several of the valley inhabitants had small peat-covered timber sheds down by the fjord. Here they stored corn and town goods, and here they changed clothes when going to church. Today the sheds have disappeared, but the country store is still standing and may acquire a new function in our time.