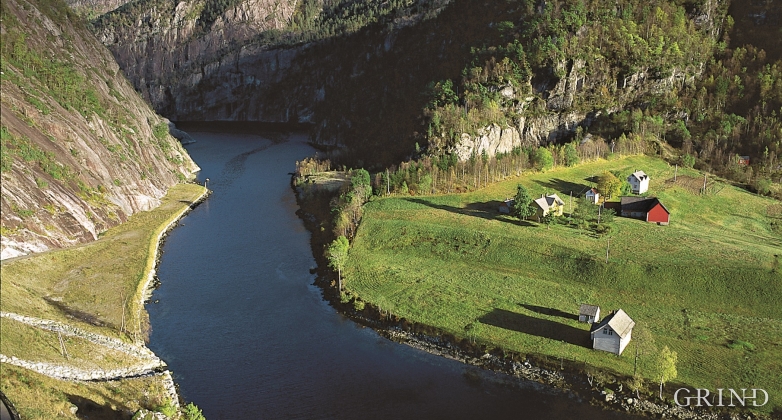 View in over Mostraumen. The old school (nearest the water) is believed to lie on the old river plain from before 1743. (Svein Nord)

THE FJORD THAT BECAME A LAKE AND THEN A FJORD AGAIN

Until 1743 the people from Modal had to wait for a flood in MOSTRAUMEN before they could draw their boats up the river current, and then row back across Lake Movatnet. But, that year the flood opened a free passageway all the way to Mo. Hordaland had gained a new tidal waterway.

The first Mo Fjord disappeared several thousand years ago. Toward the end of the last Ice Age, roughly 11,000 years ago, the glacier calved along Oster Fjord and Romarheims Fjord. There was a lot of room and a good depth there. Inside of Nottveit the fjord narrows, and the depth decreases. By Mostraumen the glacier front was stranded on land for a time, long enough that the glacial rivers were able to lay down a ridge of sand and gravel on the bottom (a in the diagram). Since then, the glacier melted so much that it freed itself from this ridge. The calving continued in toward Mo, and the fjord followed behind (b).

Nearly 1000 years later, roughly 10 000 years ago, the land rose so much that the gravel ridge at Mostraumen became dry land and this formed a threshold in the fjord. Inside of this barrier the sea became fresh water. Mo Fjord became Lake Movatnet (c). The land continued to rise, more slowly, until the heaving ceased about 1000 years ago. But, the water level difference between Mostraumen and Lake Movatnet was not as great as the land heave would suggest. The isthmus, serving to maintain both saltwater and fresh water, was more and more eroded away by the river during periods of flood, so that Lake Movatnet was gradually lowered. When the huge flood struck on the 14th of December, 1743, and broke through the isthmus, there was an elevation difference of one to two metres between the water levels in Mostraumen and Movatnet. After the big flood, the levels were evened out, and this allowed tidewater again to enter. Mo Fjord again became a reality.

Mostraumen was for a long time too shallow for large boats, since lay large stones lay in the middle of the stream. The last dredging, to 3.5 metres depth, was carried out in 1913. The current is strong further out. This is because of all of the fresh water that flows out together with the seawater, which comes in 6 hours earlier. At its strongest the current can be as high as 7 knots.

Much of the landscape around Mostraumen has been altered. There has been sand quarrying in the municipality since around 1890. This ended in the middle of the last century - when most had been taken out. Traces in the mountainside on the northwest side show how high the sand probably reached.

A sign believed to have been put up by Mostraumen, with the following text:
Warning:
Be hereby warned, when taking sand from the sand bank at Mostraumen, not to let fall or drop any separated sand, stones and gravel from along the river bank in such a way that the same may be carried away by the current and result in a shallowing of the riverbed, or that the path of the current be destroyed and made impassable. 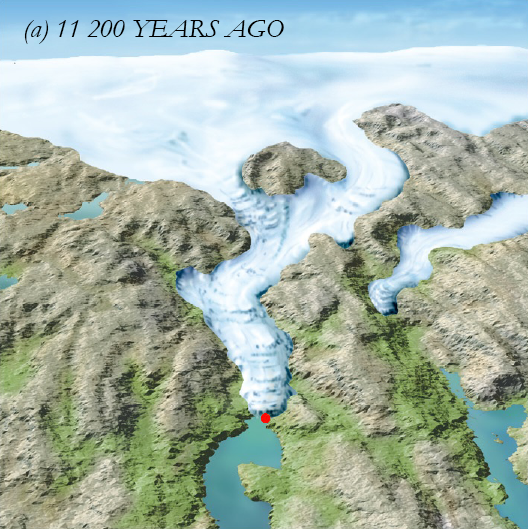 Stages in the formation of Mo Fjord and Lake Movatnet. (a) 11200 years ago. By Mostraumen the glacier front was stranded on land for a time, long enough that the glacial rivers were able to lay down a ridge of sand and gravel on the bottom. 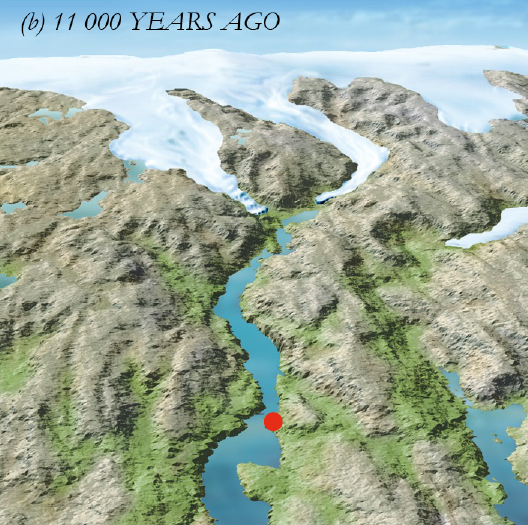 Stages in the formation of Mo Fjord and Lake Movatnet.(b) 11000 years ago. The calving continued in toward Mo, and the fjord followed behind. 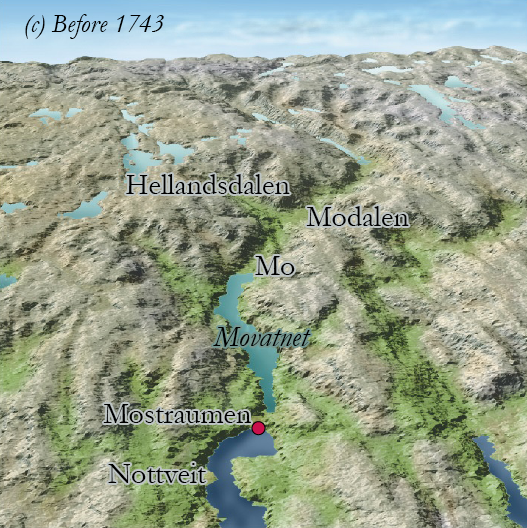