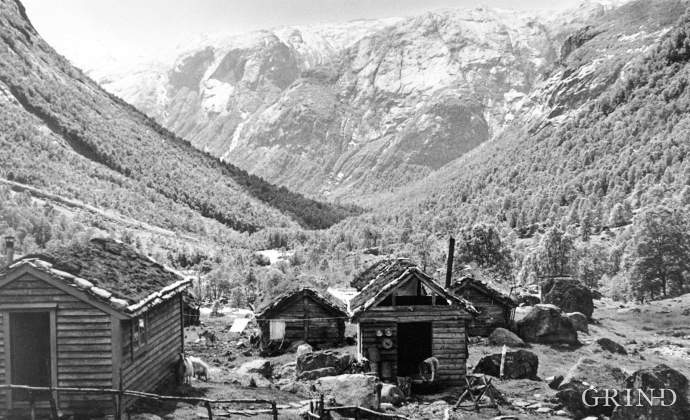 The large mountain area between Modalen, the Voss communities and Sogn is one of the finest mountain pasture areas in West Norway. In older times this area was called Steinslandsheimen, in our times it has acquired the name Stølsheimen. Power development and protection interests have been opposed here. The core area of Stølsheimen has now been protected as a landscape protection area, while some of the oldest mountain farms have been flooded. A register in the 1970s comprised almost 40 mountain farm settlements in the central area of Stølsheimen, belonging to Modalen, Høyanger and Vik municipalities.

The farm Steinsland is listed in the property register draft of 1723 with its own “Sæther ½ Miil fra Gaarden” (mountain farm ½ mile – 500 m – from the farm). It must be Steinlandsstølen that is referred to here. Here the milking sheds were made of granite with a smoke vent in the roof. In 1894 new houses in timber were erected. The oldest house standing at Steinslandsstølen is from 1774. The other mountain farm that belonged to Steinsland, is today flooded.

One of the mountain farms that provides a close-up of this form of agriculture in the farm household, is Botnane; a mountain farm close to the farm Øvre Helland. Botnane lies in a hillside near the bottom of the valley by the road up to Nygard. The mountain houses were small, that is naturally because of the difficulty of transporting the timber up the mountain. Most of the mountain farms belonging to the Modal farms had a common dwelling house, where the milkmaids stayed. Every farm had a separate cowshed, where they tended to the cows. The house on the mountain farm had two rooms, the milk-shed and the living quarters.

In the living quarters there was a hearth and this is where the cheese-making took place, brown cheese made from cow’s milk and goat’s milk, if there were goats on the farm. In the innermost room, the milk-shed, there were shelves for milk and sour cream, and if the farm did not have living quarters, it also contained a bed. The mountain farms were always situated close to a river or a stream, and also there had to be a good forest for firewood nearby.

The old Norwegian word “støl”, stadul, means a place where the cattle were gathered and milked. This is not necessarily a place where there were houses. The word “seter” on the other hand indicates a place where there are living quarters, and such places are mentioned in Snorre’s kings’ sagas, in Sverre’s saga and in the Gulating law. But leading cattle to mountain pastures, as part of the farm household, is much older than this.

The grazing landscape and the mountain farm use in many of our mountain areas developed more than 2,500 years ago, at the transition to the Iron Age. In Viking times it must have been more common to use the mountain areas for grazing of farm animals, and remains of buildings from this time have also been found.

The life on the mountain farm was hard. Already around 5 – 6 a.m. the cows had to be found and milked, and the wooden pail with milk had to be carried back to the milk-shed. The milk was then emptied into wooden vessels to make sour milk and sour cream. To keep the milk pails clean they used juniper water, which was the liquid made by boiling juniper. The vessels were then scoured with sand. After the morning work they had to descend to the main farm with the fresh milk, if the farm was not too far away. It was common to carry 20 litres of milk on the back. Those who did not make butter at the “støl” carried the sour cream home at once. They also often carried the half-finished goat cheese home on horseback in order to finish the boiling at home to save the precious birch-wood at the støl. In some places there are still støler in use, but as part of the barter economy and the economy on the farms, such use of the støl is all but history.

Already in 1826 the area we now call Stølsheimen was visited by botanist Søren Christian Sommerfelt. In the 1860s another pioneer in Norwegian botany, Axel Blytt, travelled over Vikafjellet. Both made important plant discoveries. Their finds led to an increased awareness of these mountains. With the increased interest in hiking-tourism in the second half of the last century and the close proximity of this region to centres of population in the Bergen area, this valuable natural area was explored in earnest.

The tree limit here is at about 800 mas.  – a result of a century of grazing and farming. With fewer animals grazing in the outback than before, and without the mountain farming that used the resources for cheese-making and warmth, the tree limit is beginning to creep upward again many places. The climatic tree limit is believed to be ca. 1,000 mas.  As is the case other places in Western Norway, it is the mountain birch that stretches farthest up the mountain. In good seed years for the birch, the mountain birch forest is rich in passerine species, such as Brambling, Redpoll, Fieldfare and Redwing. In some places the weasel is also a common sight.

Above the tree limit there is a large variation in the plant cover. West of Vikafjellsvegen Road, schistose phyllite dominates, providing good growing conditions for plants. In many places the schist lies at an angle, making it erode more easily than otherwise. Water seeps down the slopes and dissolves the minerals and nutrients that the plants can then use. The very best growth conditions are to be found on the south- and west-facing slopes. Here the snow melts early, and here the plants get an extra dose of warmth. At such places several species of saxifrage and other mountain plants grow, such as alpine bartsia, rock speedwell and alpine meadow rue. If you are lucky, you can also come across snow gentian and purple gentian.

East of Vikafjellsvegen Road, and in the western parts of Stølsheimen, harder and more acidic rock types dominate. To the west the bedrock is predominantly gneiss and granite, to the east cover rocks, the Jotun cover, which was shoved over during the last mountain-building event.  The hard and acidic bedrocks gave rise to poor soil and hardy plants. Some places the boundary between the rich and depleted rock types is sharp, and is clearly visible in the plant cover. Inside the schistose area one finds a number of plants that do not grow on the other side of the boundary.

85 bird species are documented in Stølsheimen, with the Snow Bunting, Meadow Pipit, Plover and Ring Ouzel some of the more common. The Snipe, Common Sandpiper, Red Shank and ducks are to be seen along the marshes and waterways. The Gyrfalcon is still found in Stølsheimen, and indirectly tells us that the grouse populations are of a sufficient size. The Arctic Loon still fishes in Stølsvatnet Lake, but it does not nest there. There is much fish in these mountainous areas, but in many lakes the trout are relatively small, and many people think they could have been harvested more. The Loon is therefore a positive factor in the fish cultivation. Other lakes have a smaller population with fine fish. In connection with power plant building, many of the spawning grounds were ruined, but the power companies now set out fish in order to compensate for this.

One can meet flocks of reindeer in Stølsheimen - they  belong to the reindeer of the Fjellheimen Wild Reindeer range, which has a population of more than 500 animals. In 2002, permission was given to hunt 160 of these.

Stølsheimen is a gold mine for power plant builders: lots of rain, many lakes high up in the mountains and steep drops. In the latter part of the 20th Century this white gold was seriously tapped. Dams, high voltage lines and several hundred kilometers of road construction has become part of the landscape, especially on the Hordaland side of the mountains. Many lakes are regulated, and pastures are dammed up.

Matre- and Haugsdals waterways were the first out. Development started here in 1952 - a development that had consequences for the western parts of Stølsheimen. In 1966 the license application for the extensive power project Evanger / Eksingedalsvassdraget was granted, a development that continued through the 1970s - and 1980's, and which affected large parts of the southern Stølsheimen. At the same time permission was given for development on both sides of Vikafjellsvegen Road. The regulation of Steinsland watershed was adopted in 1975 after the developer appealed the watershed protection from 1973. Later, Åsabotnen and Store Norddalsvatnet were incorporated into this project. The development thereby affected also the more central parts of Stølsheimen.

Persistent conservation efforts from the early 1960s onwards has nonetheless saved many natural areas. Enthusiasts in the Bergen Hiking Association and Vestlandske Conservation Society (now the Nature Conservation Council of Hordaland) spearheaded the "permanent protection of Stølsheimens key areas". Lakes Solrenningsvatnet and Halsvatnet were spared the Steinsland development of 1975. In other places, a partnership was established with the developer to reach more gentle solutions. 30 years after the conservation work began, results were visible:  With the establishment of the conservation area in 1990, parts of Stølsheimen were secured forever, with relatively little influence from the hydropower development. 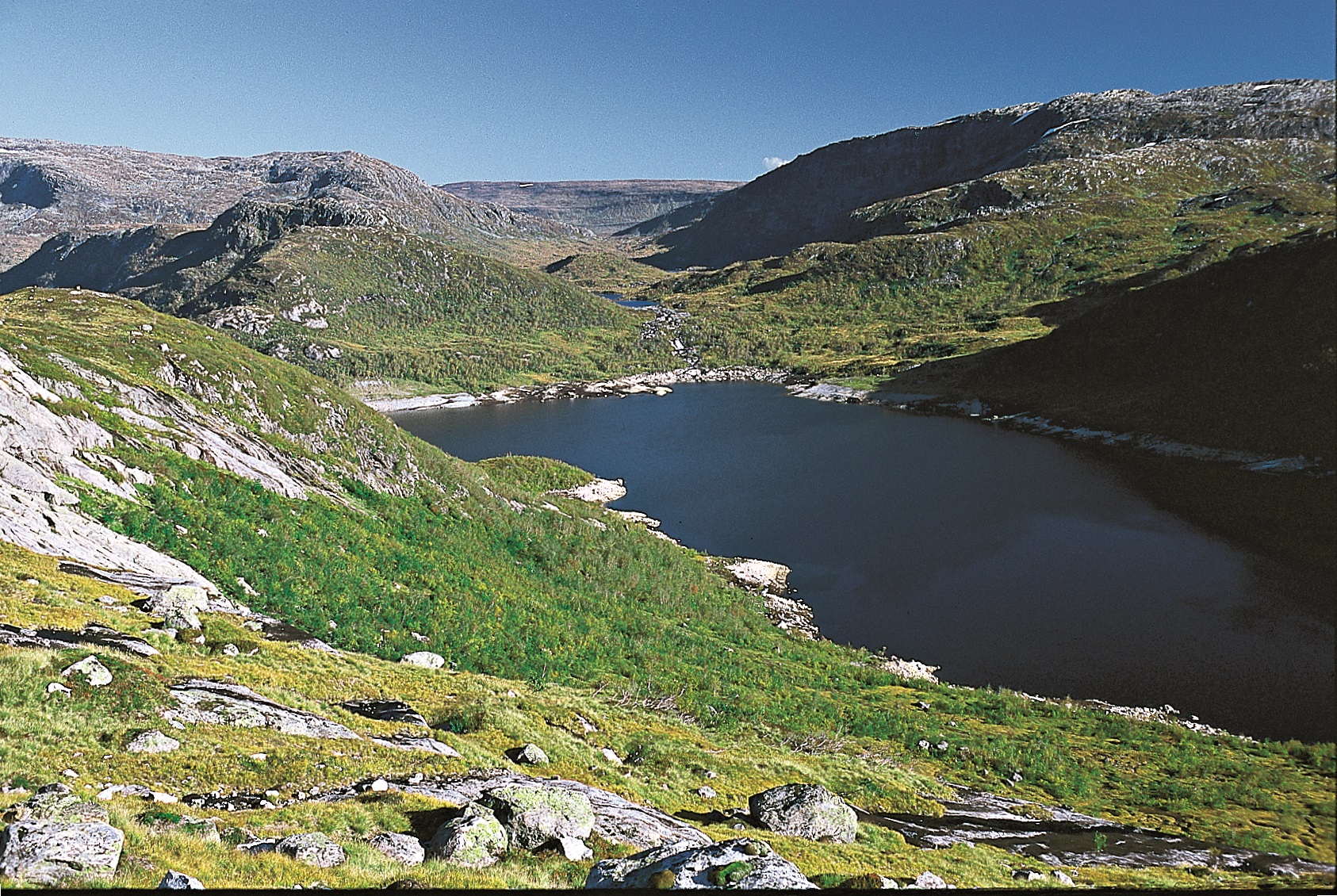 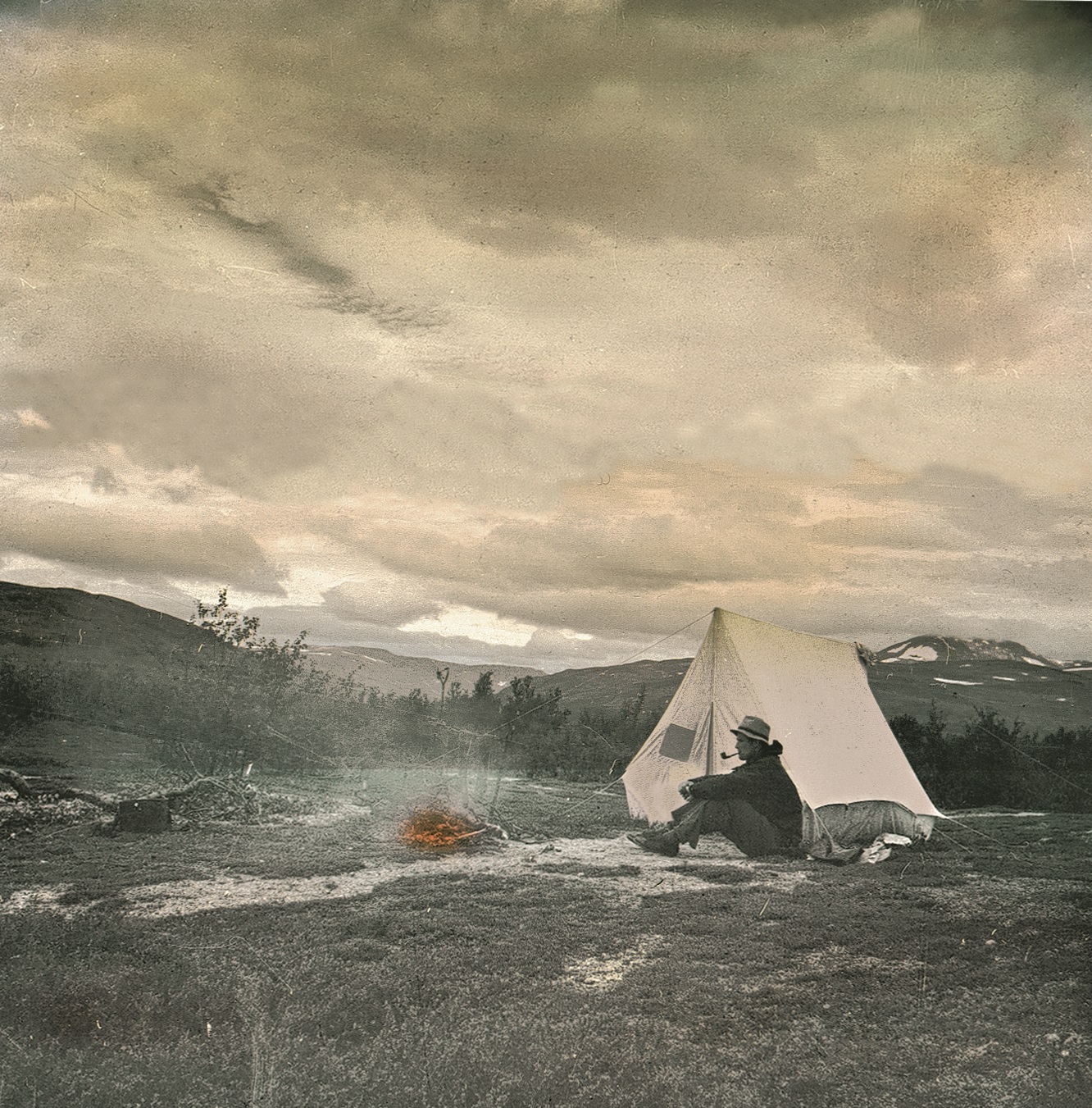 On a tent trip in Modalsfjella in the boundary area toward Masfjorden municipality in the 1930s, long before mountain ramblers discovered these mountains. (Alf Adriansen) (Alf Adriansen)