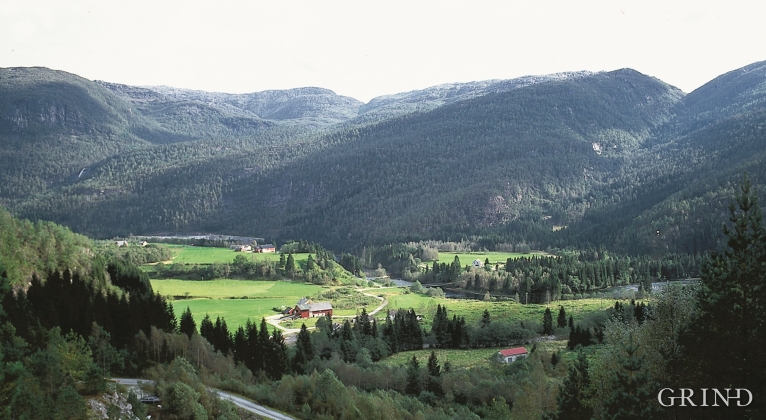 Under the grass fields lie large quantities of sand and gravel. There are plans for larger quarries in Nedre Helland (left) and Krossdal (right). (Svein Nord)

The three spades in the municipal coat of arms for Modalen are sand spades. Sand quarrying has brought income and employment. As much as 70,000-80,0000 tonnes of sand and gravel left the municipality each year since the turn of the millennium, to be used as cementing sand. Why is Modalen endowed with so much sand?

This treasure was left behind in front of melting glaciers when warmer times came to Modalen at the end of the Ice Age about 11,000 years ago. Surging meltwater rivers deep under the ice carved into the moraine deposits and brought sand, stones and gravel to the glacier front. The glacier front stopped several times as it melted back along the long and flat valley. This is how several of the glacier's lateral moraines were deposited. Some of the sediment masses were tipped into the fjord.  At its longest the fjord reached all the way to Hellandsfossen Waterfall, when the sea was 50 metres higher than today.  Other deposits were left behind on the large river plains in front of the glacier. Now, the sediment masses lie on dry ground, including those that were deposited in the fjord. Mo-inhabitants can thank uplift of the land after the Ice Age for this.

The mountain that Modal Glacier carved into is made of gneiss that includes a lot of quartz and feldspar minerals. Especially the amount of quartz increases the quality of the sand. Softer minerals, such as mica and amphibole, were crushed into fine-grained silt and clay that has been deposited at the bottom of the fjord in front of the glacier. The low amounts of iron and hummus in the sand enable it to meet the strict requirements of sand to be used for mixing cement.

Most of the sand has been removed from Mostraumen and Mo. For a century sand vessels transported sand to the Bergen area. But, from Nedre Helland and up along the valley there is still a lot left. Regardless, the sand quarrying will one day come to an end - the glacier's gift cannot renew itself. Nor is there sand and gravel in all of the mounds in the valley. In some places gravel quarries were opened before the deposits were sufficiently examined. At Nedre Helland there are two deposits, but only one of them was shown to be usable. The other is abandoned and appears as an open wound in the landscape (frame). The landowners that have now taken over the sand quarry operate according to current regulations and even out and plant the old sand pit so that it can be used for grass production.

The farms of Nedre Helland lie on an old delta plain (the forest-covered ridge in the picture below, and the flat area to the left in the picture above). The delta was laid down out in the sea right in front of the glacier, about 11,000 years ago. The sand- and gravel layers in the picture above were laid down just ahead of this delta. The layering is testimony to the varying meltwater supply. The apparently horizontal layers slant toward us, while the layers on the sides slant to the right and left. Silt and clay were carried farther out into the fjord and now lie underneath the sand layer. In this way, the material was naturally sorted. It has been calculated that it is possible to extract 8-3 million m³ of sand and gravel from this deposit alone, an amount corresponding to about 800 000 truckloads.

Deposits were removed from the mouth of Hellandsdalen valley, near Heimalia, in the 1960s and 1970s. From the picture it is easy to see that these deposits would not be well suited for mixing cement. The problem is the large stones, which make the sand operations risky, and they are too large to go through the stone-crushing machine. In addition, the deposits contain too much silt (coarse clay). The coarse masses were deposited under the glacier in the Hellandsdalen valley when the ice was so thick that it covered the whole width of the valley. When the ice later moved down the Hellandsdalen valley, as the Ice Age drew to a close, it shoved some of these deposits into the large moraine mound at the mouth of the valley.

Gravel and sand from inner Nordhordland

Hjelmås Teglverk was built in 1854, closed down in 1903. The natural raw material was local clay, here, like the Vinnes clay in Fusa. Gradually sand became a sought after product. Sand was used to cover the many roads that were now being built, for casting and for the production of building elements. In 1871 some people started freighting sand with sailing sloops; especially people from the Stamnes parishes, further out in the fjord. The Modal people only started production of sand in 1890, in Mostraumen, and delivered to Bergen. At Mo itself the sand production started during WWI. The farmers transported the sand with horse and cart from the sandpit down to the sea, where it was stored in the sheds. When the sand smacks came, they wheeled the sand on board with a wheelbarrow. In the beginning of the 1900s the production became better organised. Osterfjorden Fartøiforening (the Oster fjord shipping association) was established in 1915, A/S Urdal Sandkompani in 1912. Amongst other things they bought up the rights to sand extraction in Trohaugen in 1936. Slowly the operation became more effective. Cars took over the transport of the sand from the quarries to the freight ships, and stone crushers were built to make use of the stone that was mixed up in the sand masses. Gravel and sand became a trademark and a source of wealth for the settlements in inner Nordhordland.