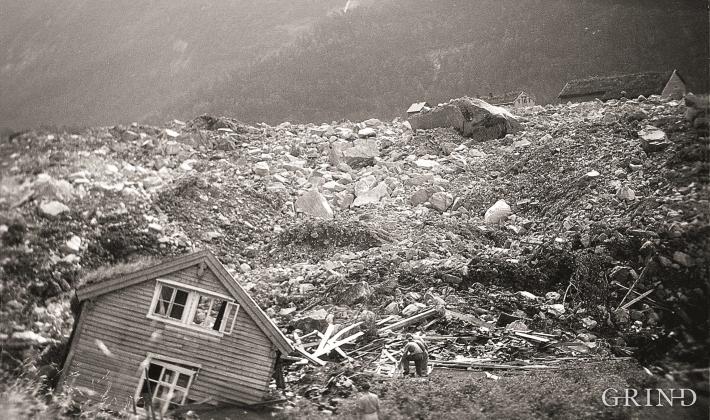 Many still remember when the avalanche struck Nedre Helland, on the 14th of August, 1953 14:30 o'clock. All of the buildings at one of the farms and the main house on the neighbouring farm were destroyed. The one woman who was inside a building escaped, frightened but unharmed. The same with the others who lived at Nedre Helland; everyone was a safe distance from the avalanche.

From 500 metres up on Storfjellet, a stone block 10000 m³ in size loosened. On its way down it took along a scree deposit from 300 metres further down on the mountainside. The mass which then was set in motion, was about 15 times as large as the stone block. All of this stone thundered down a 200 metre high slope and spread into a 5-10 metre thick layer of boulders over the flat terrace. The avalanche deposits covered 45,000 m².

The masses that fell down from Storfjellet made a gigantic noise when they hit the scree. The energy from the avalanche was transferred to the scree, which from before had fine-grained water-saturated sediments in the bottom.  Together the mixture flowed like a "stone porridge" down the slope and out on the terrace. When the stone dust had settled, everyone could see the natural destruction that had been caused.  The upper parts of the house, including the roof, had sailed forward - with its roof tiles intact! After the avalanche the stream that ran alongside the inner part of the terrace was dammed up, becoming a 50 metre long lake in rainy weather. Two small farms escaped unharmed, but got flooded cellars. It was necessary to dig ditches in order to empty the new lake.

Above Farestveit, further up in Modalen, there was also a large older landslide, Valura. The slide went clear across the valley, and large stone blocks from it now dam up the river. The scar from the landslide on the north side is easy to see.