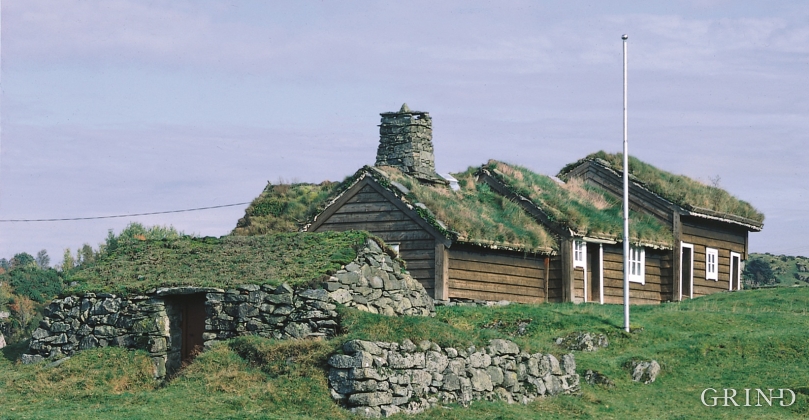 In the lightly undulating landscape at Boga there lies an old house with several rooms on a small rise. In fact it looks like three houses built into one another; a scullery, a living room and a store with a loft. From other sources we know that this house had covered passageways and sheds round all the walls in the 19th century; a compressed “long house” with inter-connections between all the rooms. This is a building style from the Middle Ages that we see traces of; a building corresponding to those we have seen remains of at Høybøen in Fjell and Lurekalven in Lindås. Bogatunet was restored in 2006.

The multiple roomed house at Boga shows us a style of building which must have been a feature of the coastal villages for many centuries. Parts of this building probably go back to the 17th century. According to tradition a loft was built above the store in 1735, and in 1818 a room with a window was built on the east side. When the hearth was replaced by an iron oven at the end of the 19th century, the covered passageways were pulled down and windows were put into the walls.

The style of settlement was closely related to people’s way of subsistence. Natural resources from the sea and the land were used with great care and consideration. The cultural landscape at Boga with its home fields, its rough grazing, stonewalls, paths, copses and boat-sheds give us a close up picture of a little farm on the west coast.

If we used the term “ecological” building style, we could not find a better term to describe the long house at Boga. The covered passageways which, in the late autumn, were full of peat, wood and poles, provided insulation for the rooms inside. The hearth room was the main kitchen, the living room was where people lived and in the store they kept the food whilst the beds were in the loft. The loft was pulled down in 1905 but when the Nord and Midthordland Historical Society took over the building in 1920, the loft was reconstructed. A jointed hayshed was built up on old remains, and down on the fjord there was a fine boat shed environment.

In the hearth room there is a decorative table painted with a mixture of chalk, lime and water. The decorative painting as it was known is probably linked to medieval decorative traditions; knots, rosettes and eight petalled roses which resemble the pattern on an old woven wall hanging. When the living room was washed and sanded for a celebration and festivities, it was usual to decorate a couple of the planks around the room.

A reconstructed sketch of the long house at Boga as it must have looked in previous centuries. (Nils Georg Brekke).

Painted decoration in the living room at Boga. (Egil Korsnes).

We find much evidence in the coastal settlements of western Norway that the hearth room did not stand alone, but was often constructed together with the scullery or store. Here we are in the midst of one of the most interesting chapters of Norwegian building history; Eilert Sundt's views on the Jæren house and the “construction of the living room and the store together”.

Where this question has occupied researchers for several generations, it is because no one can avoid wondering about the relationship between the functional multi-room house which we know from later centuries, with the living room, the scullery and store, surrounded by covered passageways and sheds, and the long house traditions from the Middle Ages and the Viking times.

The local historian Johan Litleskare has written about the old long house in Nordhordland. In his time there were still the remains of a house with a timbered passageway and cubicles at Fjellsenda in Radøy. According to tradition the building was supposed to have looked like the reconstruction with two stores, a living room and a scullery in a row with covered passageways on both sides. The total length of this building was about 20 metres. Litleskare does not give any information on the age of the house, beyond saying that it looked like a drawing from the second half of the 19th century, but in his opinion the house went back to the 16th century. From the material which has emerged in recent years on deserted farms of the Middle Ages, it seems he was right.