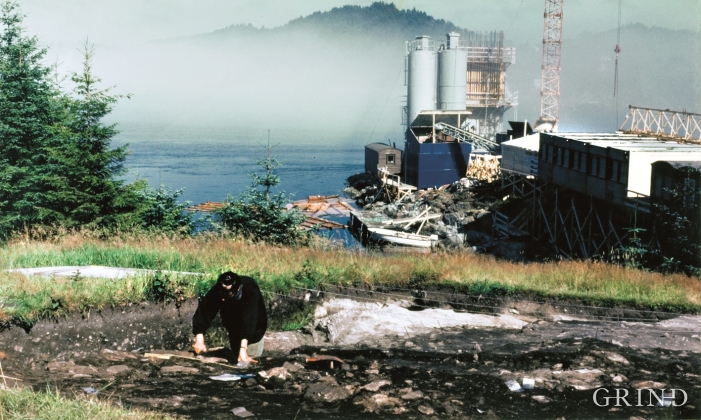 What was it that drew people out here time and again throughout 180 generations? We find the answer in the waste dumps - or more correctly in the tiny little remains of bones found some places in ashes or in fireplaces. A great many of the bones which could be identified were of fish. Amongst the mammals, seals and otters dominated, and amongst the birds there were only seabirds.

The finds show that, throughout time, it is the sea current, rich in fish, which have drawn people, animals and birds. Because Fosnstraumen is one of the best fishing areas in Nordhordland. Much fishing gear and the remains of fishing gear made of stone were found in the settlements, and a quantity of waste from the making of gear, about 230,000 pieces in total.

In the eldest layers right at the base of the settlement small, primitive flint axes, and arrowheads from the first coastal people were found. They settled here beside the sea current almost 10,000 years ago. But after them it seems that the place was forgotten and that it lay unused for about 1,500 years. About 6,400 BC another group of people came to Kotedalen and discovered the rich source of food. For the next 3,600 years the smoke often rose from the settlement on the edge of the woods in Fosnstraumen.

About 2,800 BC - at the time when the first large pyramids were being built in Egypt --- the settlement at Kotedalen was closed down for good. They certainly continued to fish in the current, as much as ever before, but the settlements were situated elsewhere. After this it was regard to arable land and grazing grounds which decided where it was best to settle.

From archaeological excavations (Knut A. Bergsvik).

Hooks and rope were, together with spears, the commonest forms of fishing gear in the Stone Age (Ann Mari Olsen).

Map of the settlements at Fosnstraumen.

In the Old Stone Age the settlement at Fosnstraumen was only visited in the summer months. coalfish was the most important species of fish, but much coalfish and cod, and a little salmon, haddock and flounder. The coalfish was of a smaller size. In the late Stone Age people lived by the current, both in summer and winter. Fish was just as important as it had been previously and the same species were harvested. In both the early Stone Age and the late Stone Age, hooks and rope were the commonest gear. In the late Stone Age, finds of herring and eel indicate that nets and traps were used. And the herring stock which today lives in the fjord at Lindåspollane is in fact 6,000 years old.