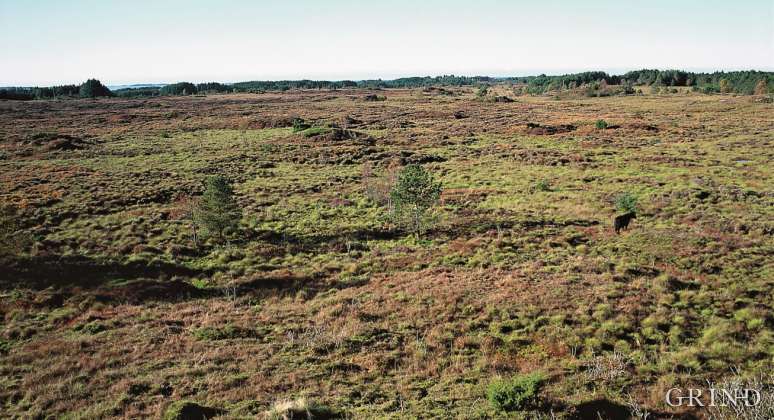 Between Lake Kvalheimsvatnet and Lake Mykingsvatnet, north of Grindheim, we find one of the biggest continuous lowland bogs in Hordaland. It is 500-600 metres across and a whole 2 kilometres long. Locally, the bog is called "Havet" .

Bogs are only found where the rainfall is greater than the evaporation, usually in depressions or flat areas with poor drainage. High moisture in the soil and a cool climate gives a slower break-down of dead plant remains than growth of new plants. Over several thousands of years, thick layers of dead, partly rotten plant remains build up. This peat layer can be several metres deep. Large, continuous bog areas are important niches for many plant-, insect- and bird species. Cultivation, ditch-digging and planting of forest have led to the decline of bogs as a natural landscape, but on Radøy there are still several big bog areas.

"Havet" is somewhat drained around the edges, and both naturally reproducing and planted forest are gradually taking over the bog. There are signs of peat and mould removal many places. Human interference with this bog is nonetheless quite small. Since it is unusually hummocky, it is difficult to get around in. It is quite an accomplishment if you manage to walk around without falling into the soggy holes between the grassy mounds.

The peat from this bog is nutrient-depleted, and the vegetation is therefore not especially diverse. Typical bird species are the Snipe and Curlew, in addition to passerine species such as the Reed Bunting and the Whitethroat. The Red-throated Diver often flies overhead because it lives by the freshwater at the fringe of the the bog. The Short-eared Owl has also been observed in this bog area. The Short-eared Owl has never been found nesting in the lowlands of Hordaland, but year after year, it nests on Hardangervidda.

"Havet" ("The Sea") is a suitable name. Both the size and the wavy surface from all of the grassy mounds reminds one of the sea. In times past, "Havet" was used as a transport route to and from the settlement of Bøvågen - then they said that they "were going through the sea".

Radøy has many oblong lakes lying in a northwesterly orientation. Between the lakes there are smaller water systems, and some man-made canals, as in Storelva near the entrance to Lake Mykingsvatnet.

Bog bean is quite common in the water and mounds on Radøy. This plant flowers early in May.

In the years 1993-1997, there was a pair of cranes on Radøy throughout the entire nesting season. Whether they actually nested -
or just searched for a good nesting site - we don't know.

The crane is normally an eastern bird species; there are only a few nesting pairs on the Hordaland side
of Hardangervidda.

It is nonetheless not so surprising that the crane should consider Radøy a good nesting locality.
Several bog areas lie suitably isolated from traffic that the crane and other game animals, that
require an extensive territory with little disturbance, can thrive. If there were more frogs or
other amphibians on the bogs in Nordhordaland, perhaps the cranes would live there permanently