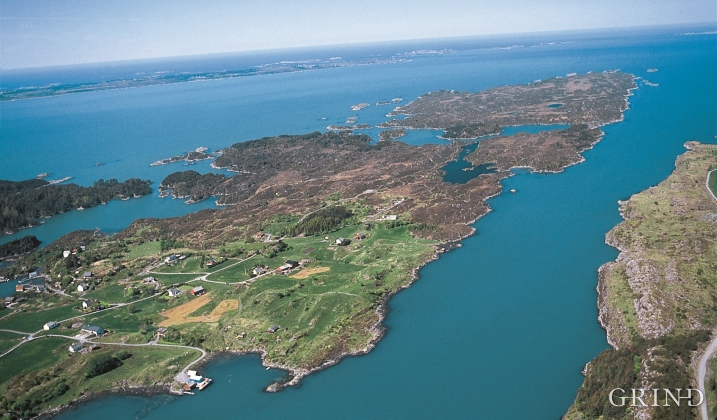 The farms on Toska lie on moraine soils from the Herdla moraine. Further out lie big bog- and moor areas. (Helge Sunde)

The peat bogs on Toska have been mined for peat since 1946, when the island got electricity. In this treeless coastal landscape, peat was the most important source of energy, and this took quite a toll on the bogs.

Before the extensive mining of peat, the bogs on Toska were far bigger and much deeper than the remnants that are left today. Many places, you see tree stumps sticking up. In one of the bogs, there is a 15-metre long oak tree trunk, as a reminder from several thousand years past, when the coast was covered in forest.

But, the outback was used for more than fuel: Up until about 1950, the heather moors on Toska were grazing land for sheep and cows. In order for the heather to be valuable as fodder and not have too much wood, it had to be burned off year after year; every fifth year was considered sufficient. Then, the forest never had the chance to grow in again.

Today, trees and bushes are sprouting up. There are too few sheep left to keep the trees down, and the regular burning off of the heather has ceased. In the uninhabited Uttoska, the pasture land is still held in check by free-grazing sheep. Uttoska has one of the biggest continuous heather moors in Hordaland, free and open with much bog and rocky outcrops. Common heather dominates, but there is also some purple heather, especially in the sunnier spots. Also on Toska, there are still fine heather moors. But look out for the viper snake; it is dangerous and not uncommon.

Alongside the rocky crags and in the tidal zone sit the Herring Gulls and the Black-backed Gulls and scout for food. The Common Terns patrol the shore looking for small fish that have been caught with too little water overhead. The Oystercatcher is often seen bustling about. Inward on the island the Curlew is common. The most abundant bird of all, however, is the Meadow Pipit. Greyish brown and stripy, without characteristic markings, it is easy to confuse with the Twite and Linnet; all of these are found on Uttoska. In nesting season, geese rest on the moors, and several different wading birds are common visitors. In the cultural landscape around the farms on Toska, flocks of plover and ruffs feed in the planted fields, especially during the migrration season.

The sea around Toska is green and rich in small fish. This has given the basis for an exceptionally good nesting population of Red-breasted Mergansers, which are easy to see, for example from the road out to the island. Many Grey Herons also use this food platter. The nesting site for the grey herons is a densely planted spruce forest on Vidholmen outside of Mangersøya Island. By Lake Kjevatnet on the Radøy side, both the Eurasian Teal and Sedge Warbler nest.

Toska got its road connection to Radøy in 1989, with a long stone-filling through a shallow sound with a rapid current, in spite of nature, but this gives an easier access than before. Now, about 60 people live on the island.

The picture shows Norway's finest titanite (sphene) crystal, found on Toska. The titanite crystal, which is exceptionally big and clear, is shown at large mineral exhibitions around the world. Its name arises from the Greek word for wedge, referring to its crystal shape. Titanite is used for the production of the colour pigment titanium oxide. The crystal is exhibited in the Bergen Museum, in the Natural History Collections. There is also a metre-sized quartz crystal there from Toska. (Haakon Fossen)

The Meadow Pipit, a typical heather moor bird if ever there was one. (Ingvar Grastveit)