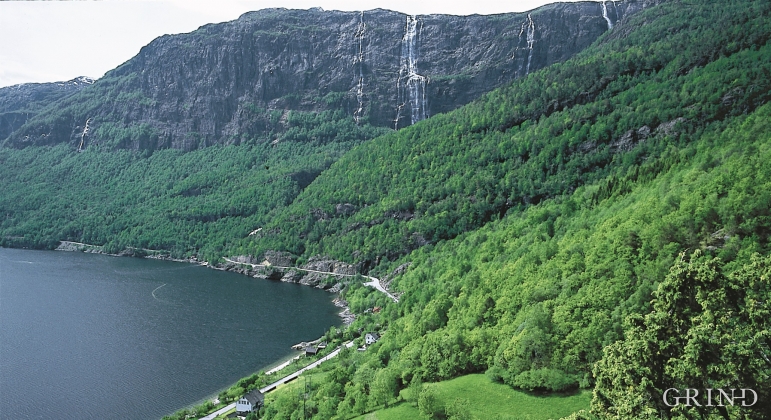 From Lussand toward Håfjell. Uranes nature reserve, with its lush deciduous forest (to the left in the picture) lies in the shelter of Håfjell two kilometres further along the fjord. (Svein Nord)

One of the most magnificent deciduous forests in Hordaland grows along the border with Kvam. The rich growth comes from the phyllite and mica schist bedrock, together with a good climate. Along the fjord the summer is warm but not too dry, and in winter it is not too cold for plants that do not tolerate the frost.

There is a large number of tree species at Uranes, and the diversity is exceptionally high. Lime manages especially well - we find the biggest in the country here. The lime tree grows both on stony scree and where there is good deep soil. The vegetation on the forest floor is also quite diverse, with several rare species. Orchids are abundant, such as the twayblade orchid, early purple orchid and bird's nest orchid.

On the upper part of the slope there is much elm, and also several high-growing perennials. These are herbs, grasses and ferns that can grow to be quite tall; typical examples include stinging nettles, large white buttercup and ostrich fern. The high perennials grow in deep soil, especially beside the foot of the mountain, where there is often plenty of water. High up on the slopes there can be a lot of moisture in the soil, even after periods of little precipitation in spring. The snow melt in the mountains ensures a steady dribble of water down over the bedrock. Corydalis and muskroot are among the first plants to bloom in April, but they are not especially common.

At Uranes there are steel cables, old pollarded trees and hayfields extending high up on the hillsides. In old times this area was an important pasture resource.

From April to June the bird life is intense. The winter wren, Norway's smallest bird, is among those who sing loudest. Screes and rockfalls on the slopes have increased access to dead and naturally hollow trees. Therefore, the nuthatch and other tits are especially common here. The Chiffchaff sings incessantly from the highest deciduous trees. In other countries this bird lives mostly in conifer forests (hence the name "Gran-songeren" in Norwegian, which means, "spruce-singer"), but in western Norway it is difficult to find a bird that is as bonded to the deciduous forest as the Chiffchaff.

In the forest of Uranes one finds some bashful, pale plants that do not resemble any other growth. These plants are lacking in the chemical that is characteristic of just about everything that grows on the earth: chlorophyll.

The coloured chemical, chlorophyll, imparts its green colour to nearly all plants. Organic compounds are created from chlorophyll, water, carbon dioxide and sunlight. This process is called photosynthesis and forms the basis for the vast majority of plant life on earth. There are nonetheless some plants that do not have chlorophyll. They must make do without either this green colour or photosynthesis, and are dependent on stealing from other plants or living in symbiosis with a fungus-partner. At Uranes we find several types of chlorophyll-less plants. In the deciduous forest at Uranes the orchid bird's nest orchid is a characteristic, but far from common plant. It has got its name because the root looks like the nest of a Magpie bird. The whole plant is brownish and resembles most anything that has wilted yet remains, after having lost its green colour. But, bird's nest orchid does not need any green colour, since it lives in a partnership with a fungus that provides it with all the nourishment it needs. All orchids must have help from a fungus for seed germination, but unlike other species, the bird's nest orchid is dependent on fungus its whole life.

Indian pipe is also dependent on a species of fungus, and like bird's nest orchid it can live underground for several years without making an appearance on the forest floor. It is mostly in pine forests that we find this characteristic and rare plant, but sometimes it also grows in the lime forest, as at Uranes. Because the entire plant is light yellow it is easy to spot Indian pipe, as long as it isn't covered by dead leaves.

In the beginning of April, while the forest floor is still brown with old leaves, you can come across common toothwort. It is a little and plump plant, with a pale pink colour. Common toothwort takes up nutrients with the help of parasitic roots that cling to other plants. Hazel roots are their favourite parasitic host. After common toothwort has flowered and the fruits are ripe, it disappears underground. This happens in early summer. Common toothwort is most common in Sunnhordland, and is not known from the Uranes area. But, since there is a lot of hazel in the forest here, will common toothwort perhaps turn up one day?

On deep, fertile and moist soil high up in the deciduous forest, one finds large white buttercup. (Bjørn Moe)