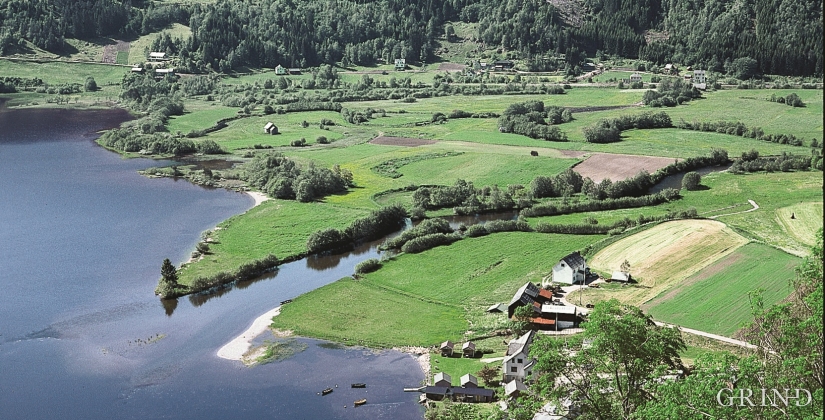 The delta at the outflow of Storelvi in Granvinsvatnet. The masses of sediment that the delta deposited as it built out into the water make flat and easily-cultivated farmland. (Bjørn Moe)

FROM FJORD TO FISH-RICH LAKE

After the ice age, Granvin Fjord reached all the way up under Skjervsfjossen waterfall. Just a thousand years later, as a result of the rising of the land after the ice melted, this whole inner part of the fjord freed itself of the sea and became Granvinsvatnet lake. In spite of this rise in elevation, this waterway is still navigable for fish: Sea trout have wandered into Granvinsvatnet in more recent times and evolved to become freshwater trout. And salmon and sea trout made the journey 13 kilometres up the Storelvi river.

Storelvi begins at about 250 m a.s.l. at Flatlandsmoen, by the boundary to the catchment area for Voss. Side rivers from the area to the north and south of Skjervet carry water from snow-rich mountain areas. The water supply is therefore good, even in dry summers. But the amount of water through the valley was much greater at the end of the last Ice Age. Deposits of sand and gravel then went out into Granvin Fjord, which at that time was much longer. The sea level was about 95-96 metres higher than today. During the rising of the land, lower delta flats were built out toward what first was a fjord, but later Lake Granvinsvatnet. The land rose so much that Granvinsvatnet and Granvins Fjord got separated from each other in the end, creating today's river channel out into the fjord.

The large delta flat and the delta out into Granvinsvatnet, as we see them today, are thus just a phase in the journey of the river mouth down through the valley, a journey that has continued for ten thousand years. The delta still continues to build out slowly into the water. As the delta builds out, the river wanders sideways over the river plain; it carves into the sides of the river banks and thus forms meander curves. During periods of flood it can go so quickly in the curves some places that the water floods over the banks and deposits sediment on the cultivated river plain.

The wetlands in the delta are home to a rich birdlife and several rare species of plants. Typical wading birds in the preserve there are Red Shank, Snipe and Common Sandpiper. The wetlands are also a good fishing grounds for the Grey Heron. Previously, there was a Grey Heron colony of up to 8 pairs on the rocks by Bjørnskor. Species like reeds, blister sedge, pygmy weed and iris grow in the water- and swamp vegetation. The Granvin delta is one of the few places where bay willow grows in western Norway.

Lake Granvinsvatnet was once known as a good place for char. Char came into the 3,6 km² large and 98 meter deep lake around 1970. The fish was believed to have wandered in from the sea, but later made its home here. It did not take long before it had reproduced so much that there was a basis for extensive commercial fishing. In 1980 2 tonnes of char were caught. But then, the average weight went quickly down, from 207 grammes in 1978 to 129 grammes in 1980. In 1993 it was as low as 60 grammes. Thus, the basis for commercial fishing collapsed. Sea trout and salmon fishing in Storelvi has also had a negative development. Salmon lice probably is to blame for their dramatic decline. The Storelvi was once one of the best rivers for sea trout in the country. The few salmon that remain are protected.

There are also a good many eel and other trout in the lake, in addition to large amounts of three-spined stickleback. The latter is a part of the basic diet for the Red-breasted Merganser (picture); it might even be the largest freshwater nesting colony of Red-breasted Merganser in Hordaland that lives at Lake Granvinsvatnet. Freshwater crayfish were set out in the lake in 1968, but it is not known whether the species survived.

Trench-trap with trench. From Halvfjørdingen in Granvin. The picture shows an old fishing method that is no longer permitted. One led the fish along an artificially built up trench and into a trap that was made from vertical branches shaped like a round tub. The fish came into the trench through a funnel and could not find their way out again. The upper part of the trench-trap was normally constructed with cords of hazel braided through vertical poles. The fishing was carried out when there was a large amount of water in the river. Before 1900 there were more than 20 such trench-traps in use in the Granvinselvi river. (Nils T. Eide)

At Seim, just over from Øvre Vassenden, we see clearly how the river has carved itself down in the terrace in an outer swing. (Inge Aarseth)