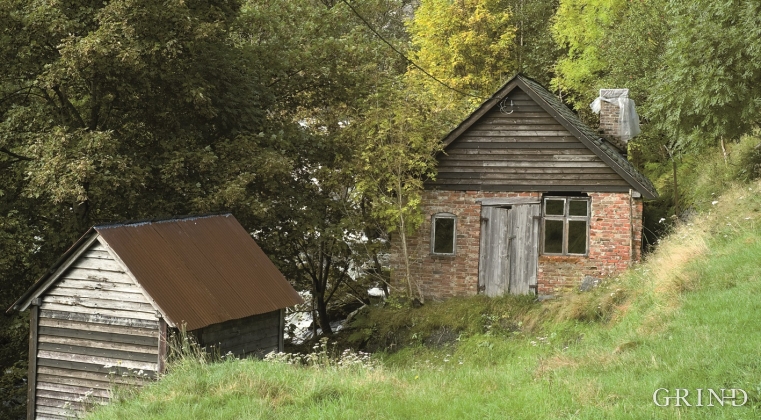 Scythes used to be made in the brick house just across the motorway through Folkedal, up until the middle of the 1950s (Svein Nord).

THE SCYTHE SMITHS IN FOLKEDAL

For many years the Folkedal scythe had a good reputation. Immediately above the highway through Folkedal there is a long brick building, on the inner side of the river. Here production of scythes went on to the beginning of the 1950s.

The house is supposed to have been built around the beginning of the 19th C. Here were three smith hammers driven by belts that derived their power from a turbine above the house. This was powered by water from the river.

During the last years there were three smiths who produced scythes in this smithy. The brothers Håvard O. Folkedal (b. 1897) and Oddmund O.Medhus (b. 1901). These both produced and sold scythes together. In addition, Andreas J.Medhus (b.1888) operated a smith hammer on his own in the same house. The house was also situated on his property. All the same, these were not the first scythe smiths in Folkedal. Both Håvard’s and Oddmund’s father, Oddmund O.Brekke (b.1860), and Andreas’ father, Johannes O Hamre (b.1855), were well known scythe smiths in their time. They were probably the ones who originally built the smithy where it is now situated.