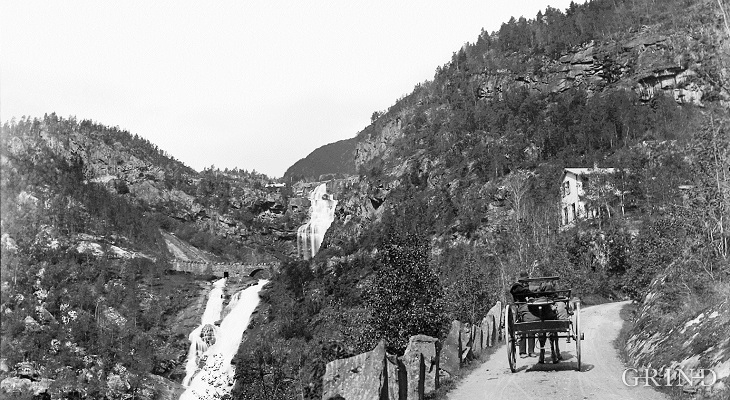 The road between Eide in Granvin and Voss is one of the oldest roads mentioned in the Middle Ages. In a diploma from 1343 from Voss regarding distribution of road works, we also find mention of the road to Angr (the Granvin fjord).

The steep mountain section in Skjervet, with the large waterfall, was difficult to pass, and another route probably went by Brekke and Jørdre down to Klyve. The Granvin farms, situated up here, had their church road via Jørdreskleivane. Only in the 1700 was there a passable road across Skjervet, in this main traffic artery between Hardanger and the Voss communities. There was a transport station at Eide by the Granvin fjord, and at Øvre Vassenden at the Granvin lake and at Flatlandsmo.

From Voss there was a well-used road from Flatlandsmo across the mountain to Folkedal and the Granvin fjord. The road through Skjervet was rebuilt several times in the 1700s and the 1800s. As early as 1817 and 1835 the bishops Pavels and Neumann travelled here by horse and cart, but the major improvements came after 1840. The drivable road through Skjervet was the first road item on the agenda for the first county assembly in 1838. The funding was passed on the grounds that the road had to be prioritised, as it was the only passable road between Hardanger and Bergen.

After a major rerouting in 1870 there was a continuous road all the way to Eide. At the time there was talk of closing down the transport station in Øvre Vassenden, but because of the need for travel by officials in the district – the tax collector and the district recorder – the transport station here was only closed down after WWI, when the cars took over. In WWII there were fights between Norwegian and German troops  in Skjervet, on 25 April 1940. Norwegian positions in the railway tunnels opened fire on German troops who advanced from Eide.

In 2011 the 4080 metre-long Tunsberg tunnel was opened so that travellers could get where they were going without having to manoeuvre around hairpin turns and waterfalls. If one prefers the old road it is still possible to take that route during the summer half of the year.

The transport exchange at Øvre Vassenden was an important spot in the traffic between Hardanger and Voss. (Knud Knudsen).