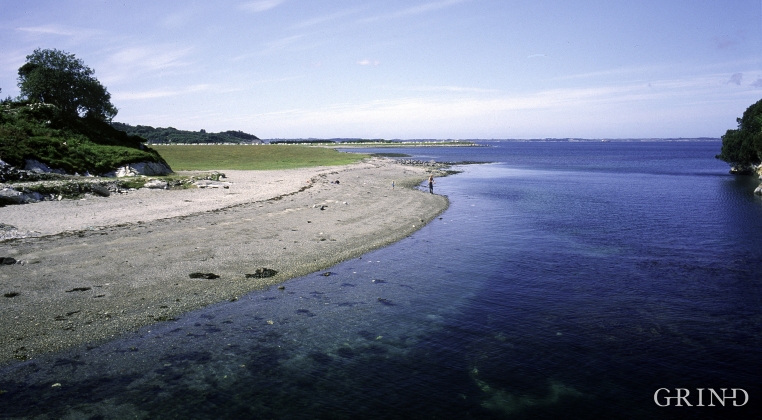 The shift in the landscape is striking between the barren craggy moors north on Askøy and the green fields of Herdla, which has the county's biggest farm. The majority of Herdla, such as the island appears today, is a gift from the glacier: The glacier that advanced here over 12,000 years ago stopped at the northern tip of Askøy and took its time building up the moraine on Herdla. Since then, Herdla has been under continual transformation. The re-organisation of the loose sediment deposits continues today.

During the Younger Dryas cold period, the fjord-glaciers flowed out into Oster Fjord and Herdle Fjord. Between the northern tip of Askøy and Litla Agnøyna, north of Herdleflaket, there was a piece of earth that stopped up the ice movements. Meltwater deposited sand and gravel by the edge of the glacier. With time, these processes built a delta out into Hjelte Fjord (B on the map). The sea level was higher then than now, and remains from this delta lie at about 32 metres over sea level, as a terrace on each side of the entryway into Herdla fort. Before the glacier deposited its loose deposits, Herdla was just a narrow, little island (a). The original island appears today as the forested ridge just east of the road to the fort.

The glacial sludge (silt and clay) was deposited on the sea floor in front of the delta. Today, we find this clay down by the sea in Djupedalen (by the shooting range). Shells that have been found in the clay have been dated to be roughly 12 5000 years old. Just after this, the glacier advanced again, pressed together the loose deposits and left behind big blocks (c). The blocks now lie in a belt along the west side and over Prestvika to Urneset in the north.

When the glacier melted back in Herdle Fjord, the land began to rise (d), most in the beginning, and afterward, gradually less. About 1000 years ago the rebound of the land ceased. Herdla had at that point gotten rid of 32 metres of sea water. As the land rose, the loose sediment deposits on Herdla were transported further. Those that originally were beaches got lifted up to dry land. Sand, gravel and stone got washed down to the new beaches that after a time also got raised up out of the water. The transfer of storage of beach material has continued right up until today. Other loose sediment deposits remained where they were. We find these today above the present shore level, making up slopes and terraces.

Not only did the loose sediment deposits get transported to steadily lower beach levels, they also got sorted and transported by currents and waves. The biggest waves have always come from the north. Over thousands of years the waves have moved the masses of sediment southwards and built out the island in the same direction. Gravel- and stone-layers that now lie on the slope above Vestrefjæra also came this way - as did the pebbles in Vestrefjæra today. On the slope there is also a thin layer of drift sand (aeolian sand), with an 8000 year-old black layer of soil. Pollen samples from this layer witness to warm-loving forest nearby, comprised of maple, hazel and oak.

On the northeast side of Herdla, there was a tidal current between Hjelte Fjord and Herdle Fjord that carried out the building work. The materials were sand and gravel, originally deposited in front of the ice. The tidal waters and waves from the northwest transported the masses out toward Kallsøyna. The strong current reorganized the sediments and built the tidal flats broader and longer as the land gradually rose. In this way, the area avoided becoming dry land, but about 2000-3000 years ago the land had risen so much that the current had to give up its work. A wide tidal flat rose up out of the sea, and Valen was created

Herdla is created: The stages in development from the end of the last Ice Age to today (Inge Aarseth/Eva Bjørseth)

The beaches of Herdla

Throughout Hordaland the beaches tend to be small. More and more of those that are used for swimming are man-made, created by dumping transported shell sand. The beaches on Herdla have been developing naturally over several thousands of years. But, if you want to swim on Herdla, you must be sure to do it outside of the protected area.

In Herdlevågen and in the bay by the turn-around area, there are beaches with fine sand and muds. West of Kallsøyna one finds sandy beaches, in Vestrefjæra gravel beaches and north of Vestrefjæra beaches made of stone blocks. In Prestvika one finds all types of beaches in a little area. The explanation for this variety is that some places lie exposed to waves and currents, while others lie more protected.

In Vestrefjæra one can easily see the result of the waves' unceasing work. Most of this work is done during winter storms. When the storm waves break, they pluck loose stone, that then gets tossed in toward land. Where the stones fall down, they form a raised beach. The rounded stones end up in the raised beach, while the flat ones get thrown further and fall down on the inside. Therefore, it is very seldom that one finds flat stones down on the beach, while the round stones lie more stably here in a layer of sand and fine gravel. The raised beaches change form from year to year. If the storms come during high tide, the loose sediment deposits will be dug out also from the slopes above the beach, such that the peat and mountain pine slide out. Inward through the bay of Vestrefjæra, the stones are smaller, both on the beach and in the raised beach. The reason is that the energy of the waves gets dissipated inward over the bay, while it is more concentrated outside on the spits.

It is best to study the sandy beaches when it is low tide. In Prestevika in dry weather, the landward-driving wind blows sand from the beach up onto land, where it is deposited as drift sand. Down on the beach we often find small parallel ridges created by waves, "ripple marks", and traces of life that lives under the surface. Both bristleworms, which produce small sand pyramids, and shell creatures of many different kinds live there. This gives some of the basis for the rich bird life on Herdla.

Rhomb porphyry and flint are not found in the mountains in western Norway, but if you are lucky, you can find them along the beaches on the west and north sides of Herdla. The must have come from a long way away: Either they were plucked up by the ice and carried along the Norwegian oceanic trench, or they were carried with the ocean currents, frozen in icebergs. Rhom porphyry, a beautiful reddish rock type with light feldspar flecks, came from the Oslo Rift. The flint, a blessing for Stone Age folk, came from Denmark and Skåne.

The rock collector will also find many different types of stones here: Most are diverse types of gneiss, but there is also mangerite, gabbro, granite, ecologite, amphibiolte and quartzite. Most of them were plucked loose by the glacier in Herdle Fjord or Oster Fjord and transported further out to the delta that lay at Herdla at the end of the Ice Age. White anorthosite lights up the beach. The amount of white stones increases from Urneset in the north and eastward toward Kallsøyna and Kvitholmane, where the anorthosite is exposed at the surface.