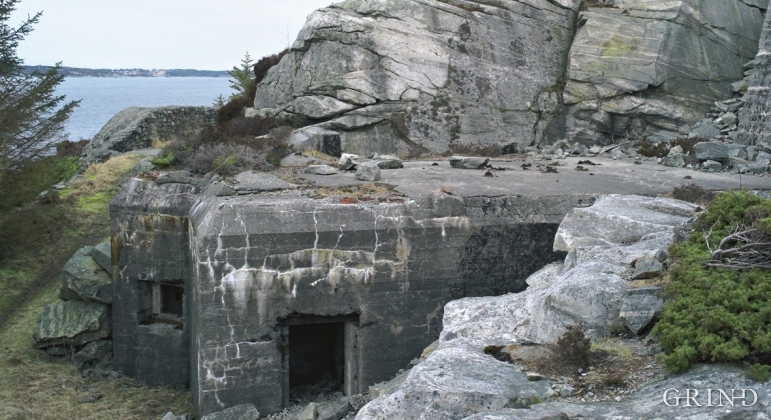 Ramsøy with the remains of the old artillery positions. (Svein Nord).

“At thick of night a thundering knock on the door; the man in the house wakes up, jumps out and demands: Who cries? Yes, now you must out, the beacon shines on Høgenut. And in the same breath, every man knew that strife had hit the land.” (Quotation of a poem by Per Sivle)

THE GERMAN COASTAL FORTIFICATION AT RAMSØY

In his poem “Vardevakt” (Beacon Guard), Per Sivle portrays in a masterly way the anxiety and apprehension that spread throughout the homes when there was a warning of war. For more than 1500 years, the people of Hordaland have been prepared for threatening enemies. There are still many remains and memorials of defence works and warning systems from old times in the county. Within Askøy municipality there is a fortified refuge from the Iron Age, wooden beacons from the Middle Ages and after, as well as fortifications from our own century.

In 1941-42 the German occupiers built extensive coastal artillery positions at Ramsøy. Together with seven other installations, the installation here became part of “The Artillery Group Hjeltefjord”, with main office at Skurtveit on Holsnøy. The batteries were manned by divisions which were organised and arranged in Stuttgart. The Ramsøy batteries had four canons with a range of 14,000 metres, which covered Hjeltefjorden north to Merkesvik and Blomvågen. Today the remains of the fortifications works at Ramsøy are the best preserved of the many German defence installations in Askøy.

In the middle of 900 Håkon den gode (Håkon the Good) divided all land by coast and fjord into coastal administration districts, each of which was obliged to equip a long ship in times of conflicts. He also instructed that a warning system be built, made up of “vetar” or beacons, on hilltops and other places which were visible from afar. In times of strife a guard should be positioned and the beacons set alight at the first sign of an enemy approaching. The Gulating Law has detailed instructions on the beacon arrangement.

The beacons were situated in a row from the Swedish border in the southeast to Hålogaland in the north, but there were rows of beacons also into the fjords and later on also in inland areas.

The beacons (vete) were made up of split logs raised as a cone. When the beacon was set alight the fire should be visible for the guards at the next beacon and a signal to them to send on the fire message. History tells us that in this way the message could go from one end of the country to the other in 7 days.

The last time the beacons were in use was in the war of 1807-1808 and in 1814. In 1807 the law officers instructed that the old beacons, which had fallen into disuse during the long period of peace, should be restored and guard-duty reorganised. The instruction from the law officer Budtz still exists, we therefore have a complete overview of the nine beacons in Sunnhordland and Hardanger from these years of war, as it appears from the map on page 435 (No. 1-9). The instruction from the law officer in Nordhordland and Voss are lacking, but the tradition is also known to these beacons.

On Lyderhornveten, which was to shine over Bergen, during the strife in 1807-08, the first beacon guard was set out on 22 September 1807. Pilots from Bergen were responsible for the guard-duty.