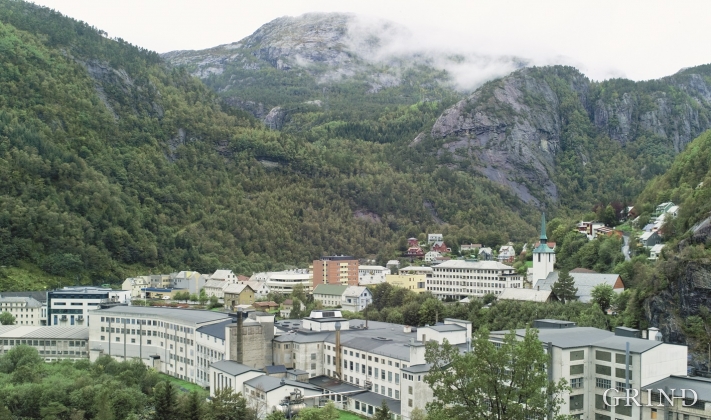 THE INDUSTRIAL SETTLEMENT OF DALE

In 1870 a change in the conditions of the ownership took place. Industry was in the offing on the farm Dale. Consul Peter Jebsen, the founder of the textile factories in Ytre Arna, was able to buy the rights for some of the waterfalls uppermost in the Dale river in 1873. He was about to build a new textile factory. In 1879 the first area of almost 8 acres (30,000 m2) was expropriated, and in late autumn 1879 the first large cotton factory was in operation. At the same time 4 large workers’ houses were erected along the north side of the present high street, and some years later the director’s house and the gas works were built. Naturally, the railway was very important for the new industrial settlement. The Voss Railway was opened in 1883, and the entire distance Oslo-Bergen was opened in 1909. In 1904 the factory organisation became a limited company and took the name Dale Fabrikker A/S. The wool factory – Dale fabrikker – is still in operation. Wool yarn and high quality wool garments of high international design are made here, providing garments for world championships.

The workers’ houses along the high street at Dale are to be protected as a cultural monument.