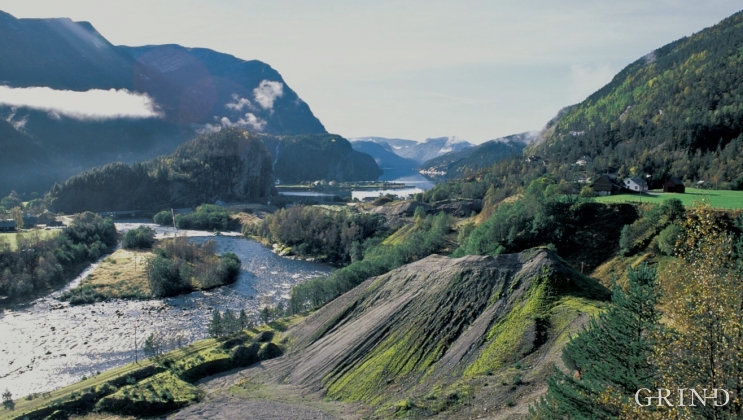 Ekso at Eidslandet. Eidsfjorden in the background. During thousands of years, the river has carved down through the mighty gravel terraces. Nonetheless, it was digging by humans that changed the landscape most over the past hundreds of years. (Sveinung Klyve)

NOBLE SALMON THAT DISAPPEARED In the late 1800s, Ekso was known among the nobility in England as having among the best salmon rivers. In summer the Lords could haul in big fish of up to 25 kg. In return, the townsfolk were paid for fishing rights, lodging and local assistance.

The salmon ran up to Raufoss, and there were many good fishing spots in the long, wide stretch of river. In a good salmon year it was not unusual for a single fisherman to catch 5 - 6 salmon of 10 - 25 kg. in one day. The average weight from 1930 to 1960 was about 10 - 12.5 kg. The Ekso could stand its own with bigger rivers like the Vosso, Tana and Atla. The fishing was good right up until the middle of the 1980s, also for sea trout. Then, the salmon populations declined dramatically, and from the 1990s there was no other choice but to declare the salmon a protected species.

The water quality in the Ekso has been monitored since 1980. In periods of little discharge, the juvenile fish have fared poorly, due to the poor quality of the water.  Acidic water affects the reproduction of the fish - salmon breed little or not at all when the pH falls under 6.  The most important reason for this development is the acid rain that comes in with the unclean air from the south or southwest. The changes in the water system in Ekso, together with the development of hydropower, enhance this effect. The water left in the 3.9 km long stretch of river with salmon in it, was more acidic than the salmon could tolerate. It became even worse in the lower part of the river after 1987, when Myster Power Plant was established.

The water quality is also decisive for many small animals that live in the fresh water. It is especially critical for several species of mayfly and sedge fly. The larvae of many of these insects generally live in the same part of the river over a long period of time, and in cold waterways they need several years to develop. Researchers at the University of Bergen have found an important method of using such organisms as indicators of water quality. If an acid-sensitive species is present, this suggests that the water quality has been good for a long time. In western Norway, winter and the period when the snow melts in the spring are the times when rivers are most acidic, and this is when the diversity of insect larvae is lowest.

A lot of effort has been made to help the salmon return to Ekso. To reverse the poor water quality, a liming facility was built at Tverrdalsbekken at Høvik in 1997. Each year a 300-500 tonne dose of lime is distributed in the river to raise the pH in the salmon-portion of the river to 6.2-6.5. The hydropower developers have been given a mandate to set out fry and spawn in the river, and until 1998 there was a separate hatchery for this fish species at Eidsland. A separate advisory board for the river has also been established which has drawn up a plan with a number of measures - one of them is to level out the water flow in the river below the power station. Today it is only permitted to fish sea trout and aquaculture salmon in the river. The sea trout population is on the increase, with many fish weighing 1 - 5 kg. If the water flow is favourable, there can be nice catches. Wild salmon are still protected because of the small fish populations and problems with interbreeding with farmed salmon.

Salmon as large as 20 - 25 kg were not unusual in the Ekso during the 1920s. From left: Halvdan Eidefet, Lars G. Eide and Ivar Eide. Huge fish are caught in the river also today : Odd Nese caught an 18.5 kg male during a fishing contest in November, 1988.If you stroke the fish it will empty its milk or eggs for use in artificial insemination. This is one way to secure the next generation.