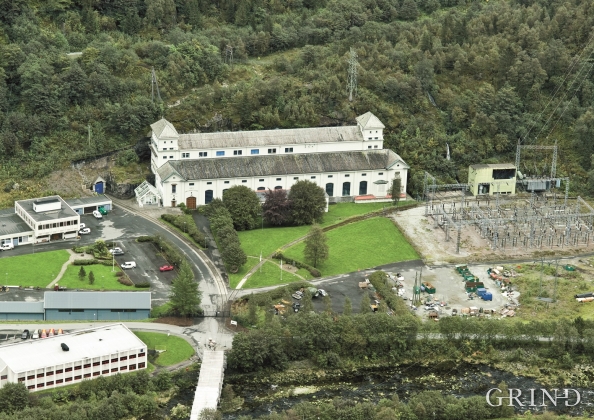 In 1923 Bergenshalvøens Kommunale Kraftselskap (BKK) expropriated large areas for power plants and development of hydropower started soon afterwards. Dale power station with the two first aggregates, each of 14 MW was put into operation on 17 November 1927. In the supply reservoir in Storefossen 5152 cubic metres of concrete were cast, and a modern and well-equipped power station was built.

This power station, a “power cathedral”, which borrows its shape from architecture with symbolic contents and status, has now become an “energy centre” under the direction of the owner, BKK.

A supply line was built to Bergen by Stanghelle, Osterøy, Romslo and Haukeland to Ramneberget. The major works at Dale at times required large working forces, in 1925 around 130 men. The power development in Bergsdalen continued, based on the regulation of Torfinns watercourse in 1932 and Hamlagrøvatnet in 1924. In 1948 the Storefoss reservoir was extended, and in 1990 a new power station was ready, with an operating tunnel and an aggregate of 110 MW.

It is this one that has replaced the power station from 1927, which has a place amongst the technical cultural monuments in Hordaland, together with Gåssand in Os, Hummelfossen in Masfjorden and Tyssedal in Hardanger.