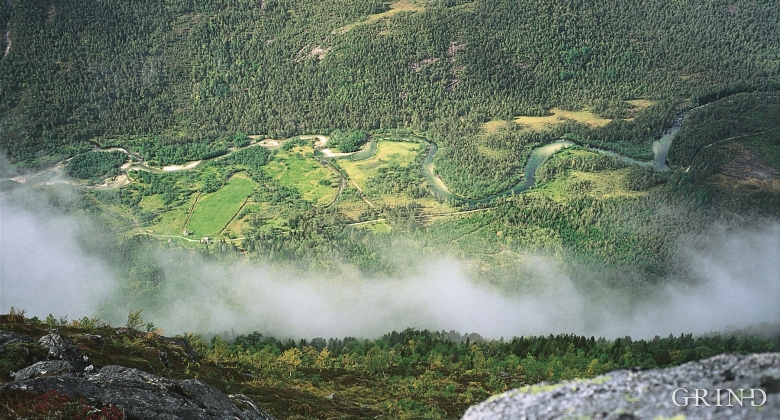 The Æneselva river winds and meanders down through Ænesdalen valley. Ænesseter mountain farm in front of the pasture to the left in the picture. (Svein Nord)

FROM LOWLAND TO HIGH MOUNTAIN AND ETERNAL SNOW

Even far down in the denst forest in Ænesdalen valley the precipitous and mighty Gygrastolen watches over you. Ænesdalen is not the easiest route in to Folgefonna, since it does not have good roads. But, the nature is magnificent. And if you first are on a trip through this unique valley, you will see how the vegetation here, as in many other valleys in western Norway, changes with altitude and light conditions.

The most productive forest lies in the bottom of the valley. As might be expected, it is characterized by timber-cutting and the planting of young pine trees. But inward of the old summer pasture we find forest that is relatively untouched. On the warm southwest-facing slopes, a rich deciduous forest grows, with ash, elm and hazel. Even though the local climate is favourable beneath the steep mountainside, there is no deciduous forest here, because there is too little nutrient in the soil from the granitic bedrock.

Grey alder has become more common in Ænesdalen since the decline of mountain farming. Grey alder forest is found growing on what previously was open fields of grass, but many of the grass types reflect that there once was grazing here. In the flat valley bottom near the dairy farm, the grey alder forest covers a big area, and it thrives on the river plains between the meander-swings. Here the forest may become flooded when water levels are high, but the grey alder tolerates flooding well.

Pine does not like flooded soil, however. There is therefore a sharp boundary between grey alder forest in the flat valley bottom and the pine forest above. The pine forest covers a big portion of Ænesdalen. The vegetation here is often dominated by a few species, including blueberry and other heather. Inward into the valley the pine forest becomes more and more mixed with birch. The more hardy birch grows higher up in the mountains, since it is less demanding of summer warmth. In the birch forest many species of heather grow that also are common in the pine forest, often together with ferns and other mountain plants, in addition. The forest boundary, the highest limit for the birch forest, lies at about 700 metres over sea level in Ænesdalen.

Inside of Vatnasølsvatnet Lake there is little forest, even though the area here is under 500 metres over sea level. Grazing may explain this, or it might be that so much snow cover long into spring gives a summer growing season that is too short for the birch to grow. In innermost Ænesdalen there is little vegetation, because only a few plants tolerate the large amounts of snow. Snowbed willow is one plant that grows well here, mainly because it doesn't have to compete with other plants for the territory. Here also there is dominance by other snow-loving plants, such as starwort mousear and star saxifrage. These have adapted to the conditions of eternal snow and ice. At places where the snow doesn't melt through to the ground every summer, only moss and lichen are able to make a living.

From the steep, high mountainsides avalanches sometimes deposit large snowdrifts in parts of the valley sides. Here, one finds a flora of species that require much light, for example, moss campion, yellow rattle and common toadflax. In the avalanche path one sees parsley fern in large amounts. Some places in Ænesdalen the avalanche paths contain many stone blocks where some of the steep mountainside has let go and charged through the forest. The blocks can be of an impressive size, as big as a house.

With many avalanch-deposited rock piles, Ænesdalen is a place where the weasel finds good places to live. (Helge Sunde)

The meanders in Æneselva river

After the Hardanger Fjord glacier calved back about 11 500 years ago, there were still glaciers in the valleys below Folgefonna. In Ænesdalen there was a glacial river bed in front of the glacier. Further down in the valley a delta stretched out into the fiord, which reached 82 metres higher than today. The glacier then advanced over the glacial river bed and deposited a 3-5 metre- high moraine ridge and large blocks of rock. These masses have since lain there as a dam to the valley, and have prevented the river from carving down into the area. Instead it began to swing from side to side ("meander"; the name from Greek, after the river Maiandros in southwest- Turkey) by carving out in the outer swings and depositing in the inner swings. Where the river has taken a short cut and cut off the meander swings, it has formed small lakes. Because of high groundwater levels the original glacial river plain has eventually become marsh.

Other rivers that meander in the county are the Etneelva and Storelvi, that run out in Granvinvatnet Lake.