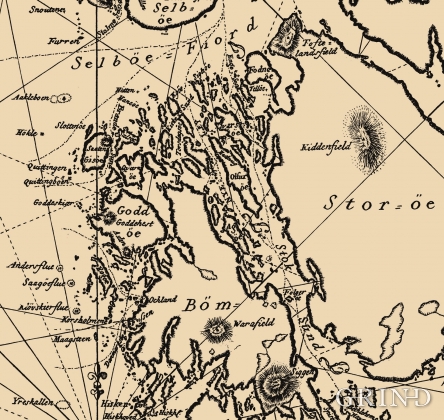 Section from a sea map from the Danish Sea Map Archive from 1798, drawn by Poul Løvernørn.

THE STRANDFLAT AND FRACTURE SYSTEM

If we study the group of islands south of Selbjørns Fjord from the air or on a sea map, we will notice that many of the islands are elongated and lie systematically in rows. The islands are divided by long sounds, for example Trollosen, Nuleia and Hjelmosen, which are oriented in a south-southeast to north-northwesterly direction.

The mountainside got fractured in a south-southeasterly to north-northwesterly direction already during the Silurian Period. A few of the narrow fissures were then filled with molten rock masses that solidified as granite. Geologists call these solidified rock deposits in such crevasses sills. Some of the granite sills contain fine, large flakes of dark mica (biotite). In many places in Sunnhordland there is evidence of movement along these faults later, also, both in the Permian and Triassic Periods. Then, new magma intruded and became diabase sills. There are also examples of such sills on the northwest side of Vassøy to the west of Trollosen, and there probably are a good many more under water in the sound. But, it is the granite sills that are easiest to see.

The landscape over and under the water's surface in the area where the Fitjaroyane Islands lie, is a part of the strandflat The strandflat in the Fitjar islands is not quite even, but the top of the islands have roughly the same height (50-70 metres). An exception is the largest island, Fonno, which is somewhat higher. There are often steep slopes or small cliffs down to the sea. The slopes follow surfaces where the mountainside once broke up. The waters are foul with shoals and rock exposures just under and over the water's surface; these are also a part of the strandflat. The largest sounds are so deep that are safe for sailing.