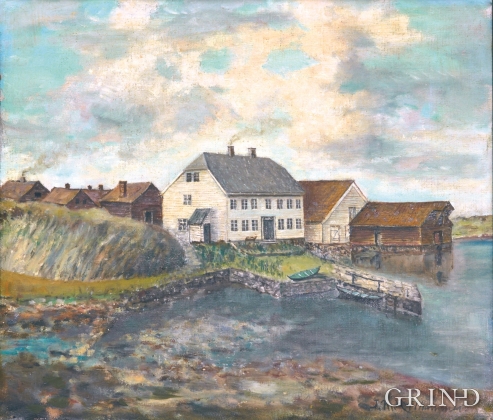 For more than 350 years Engesund has been a place for hostelries and trading in the Fitjar islands. The place is centrally placed in the shipping lane, with a sheltered harbour close to the exposed Selbjørnsfjorden. Engesund was once part of the great network of historical stopover places on the coast.

Engesund is mentioned as court location already in 1650. On 11 January in that year, the district recorder, the country policeman and six jury members were gathered in the courthouse there, with Ingeborg Olsdotter standing in front of them. She was convicted as a witch and burned on Horneland in May.

The hostelry operations on the coast were set out in the regulations of 1648, and the trading regulations go back to the same time. Engesund was one of the first trading posts outside the town. Up to 1842 it was the town dwellers who took care of the trading; later on, the country people took over. The country store was closed down in 1973.

The “Grand House” with the aspect of a town house was built around 1840 by the adventurous sailboat skipper Tollev Thomsen from Tysnes. Together with the trading business he operated the largest herring seine in the district and was one of the most industrious seine operators along the coast.

The clean-washed granite has been the drying place for large amounts of salted cod through the years. At the height of the season there was work for 200 persons. Burning the heather provided grazing for outdoor sheep, cutting peat provided heat in the house. On the fertile fields they cultivated corn and the water on the island never dried up.

The settlement consisted of houses packed close together, a large boathouse, storehouse, hayshed, outhouse, courthouse with a farm clock on the roof, a dyer’s house, bakery and farmhouse. In the sea the inhabitants have been occupied with the rearing of lobster and oysters. Today salmon farming provides work and income. Only the main building, a boathouse and some other buildings are left today. During recent years Engesund has been operated as a summer guesthouse; a lovely place to arrive at.

The old trading town of Engesund, tourist hotel for 350 years - and probably the indirect reason that Hordaland's only occurrence of whitefish is found just here. (Helge Sunde)