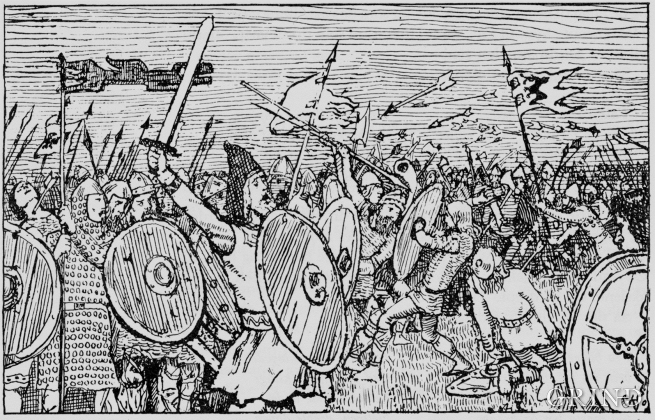 The Battle of Fitjar from Erik Werenskiold pen, the king with a black cover on his gold helmet. (from: Noregs kongesoger).

In front of Fitjar Church there is a memorial stone, sculpted by Anne Grimdalen and erected in 1961, for the thousand-year memorial of one of the most dramatic events in Norway’s history, the Battle of Fitjar. This was the place where Norway’s king, Håkon the Good, suffered his fatal injury in the fight with Eirik’s sons, probably in the year 961.

Håkon Adalsteinsfostre (Håkon the Good) was visiting the King’s farm at Fitjar with his army, and was having a get-together with the farmers, when his brother’s sons went on the attack.

Snorre tells us that the king sat at the dinner table when it was announced that many armed ships came sailing from the south. The king prepared to fight and gathered his men and the farmers. Eirik’s sons landed with their army, and a bloody fight ensued with major losses on both sides.

The king was injured in his arm with an arrow. He boarded his ship and wanted to go north to the king’s farm at Alrekstad, but when they got as far as Håkonshella, the king was dying from the loss of blood. They carried him ashore, and this is where he expired, on the same spot where he was born. His men took the body to Seim in Nordhordland where he was buried in a mound.

Øyvind Skaldespillar, who was part of the king’s circle, recounts the battle with great drama. In “Håkonarmål” (the story of Håkon) he recounts the king’s fall, and the way he was received in Valhall (the Kingdom of the Dead).

The common weapons in Viking times were sword, axe, spear, bows and arrows and shield. The Gulating laws required that free, adult men of legal capacity should have either sword or wide axe, and spear and shield. Bows and arrows were fashioned in the same way as ships’ equipment, one bow and two times twelve arrows for every thwart.

The sword was the status weapon and could have its own name. Often it was richly decorated on the hilt, often with inlay of precious metal. The sword that Håkon carried in the battle of Fitjar was called “Kvernbit” and had a gold hilt. Spears might also be decorated, whereas the axes were mostly fashioned more simply.

The shield was most often made of tree or leather with iron fittings. At times scraps of chain mail have been found in graves, but they were hardly very common. Also helmets made of metal or leather have been used. During the battle, Håkon used a gilded helmet, Snorre tells us. But helmets with horns that have become an item the popular press likes to equip the Vikings with, have not been found, neither in graves nor in pictorial representations from the Viking era. The horned helmet is most likely an item of the imagination.

Most of the Viking weapons were produced here, from iron extracted from ore-rich bogs. It was an old custom that the weapons followed the man into the grave. Judging from the finds, both iron smithies and iron blowers must have been working at full speed in Viking times. Of swords alone, around 3000 have been found in Norwegian Viking graves.

Snorre mentions Fitjar as being amongst the farms where Harald Hårfagre often stayed in his old age. It is possible that he acquired the charge of the farm after the Battle of Hafrsfjord, when he got the command of the estate from his opponents. The old Fitjar clan, which is mentioned both in “Håvamål”  and in “Landnåmabok”  was most likely the victims of such a fate.

After Harald, his son, Håkon the Good, often visited Fitjar. The farm was later often mentioned in connection with several of the historic kings, amongst them, Olav Haraldsson, who made Aslak fitjaskalle, Erling Skjalgsson’s slayer, his Lendmann in Sunnhordland.

There is a lot of evidence that the king’s farm has been situated where the old farmyard of the Fitjar farm was located, on the grassy piece of land just east of the church. A relic that may have been from this time could be the old well, which right up to our time existed here under the name of “The King’s well”, “Håkon’s Well”. The well had a base of planks. Above this was a layer of flat-cut aspen with boulders on the top. Four steps led down to the well, which was in daily use in the old condition until the Health Authorities ordered a new well of cement to be made.