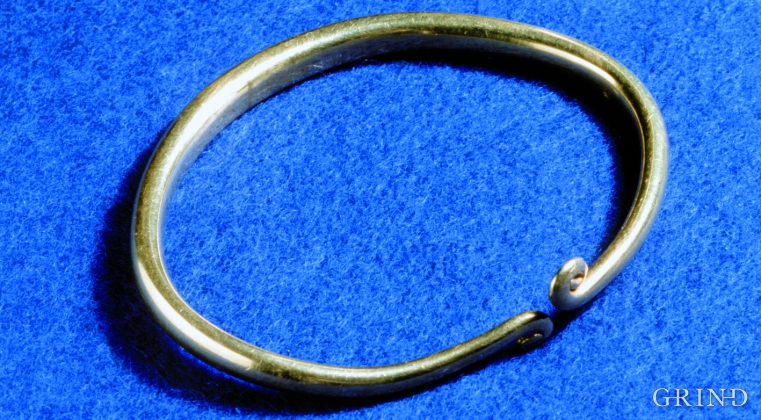 In 1953 a gold ring weighing 75 grams was found at VIKSE in Sveio during ditch excavations. The ring, which is of 22 carat gold and has a diameter of 8 cm at its largest, is make of a rod with spiralled ends. This is of a type that can be traced back to the Bronze Age around 1000 years AD.

Gold rings from the Bronze Age are a rare sight in Norway. We only know of 20 from the whole country, and the ring from Vikse is the only one from Hordaland. Some are found in graves, but most of them seem to have been hidden in the ground, either as treasure, or as sacrifice to a deity. This also seems to be the case with the ring from Vikse.

In Denmark, similar rings have been found in richly equipped male graves from the Bronze Age, often together with weapons. Gold was expensive, in the Bronze Age as it is today, and we may assume that the gold rings were a status symbol for chiefs and rich men.

The Norwegian gold came from southern Scandinavia, but even there it was imported. The nearest places for production were in Central Europe. This oldest piece of jewellery in Hordaland, which at some time may have graced the wrist of a chieftain, therefore had a long journey behind it when it ended up in the ground at Sveio 3000 years ago.