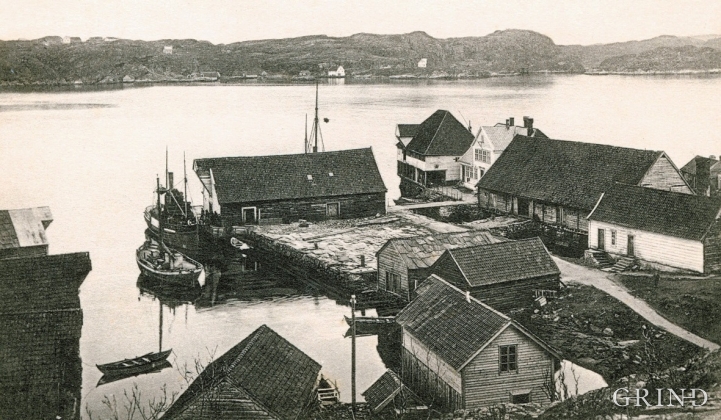 Glesvær is one of the oldest trading posts on the West Norwegian coast. In the 1700s and 1800s this was the most important fishing centre on Sotra. The first certain mention of the trading station Glesvær is in 1664. At that time it was the Bergen merchant Hendrich Wessel who owned the place and was in the possession of a trading privilege. Abraham Wessel, who took over in 1688 also obtained Royal Privilege for “Kiøbmandskab med Bønderne alleene at drive” (the only one to be allowed to carry on trade with the farmers).

The owner of Glesvær was a powerful man. In addition to be the sole person allowed to carry out trade, he was also the biggest landowner in Sund, and the fishermen in the district were obliged to hand in their catches to him. During the herring fisheries Glesvær was an important meeting place. As many as 140 vessels could be gathered here at any one time. In 1885 the owner of Glesvær went bankrupt and all the properties apart from Glesvær itself were sold off. The Bakke family bought the trading post in 1890, and today it is the fourth generation Bakke who runs the place.

Development within fisheries and new routes of communication have contributed to Glesvær having become a far less central place than formerly. Nonetheless, Glesvær is one of the few places to have survived all the changes, and is still operating as part of the historic network of trading posts and lodging places on the coast. Glesvær now opens its doors for whoever wants to experience the coastal landscape and the sea. In the summer of 1993 the owner made use of new fisherman’s shacks in an old seine-shed by Glesværvågen (bay).

Accidents at sea in storms and bad weather have been something the coastal population have had to live with at all times. One of the most terrible accidents happened on Monday 11 March 1822. In the fjord communities this Monday still lives on in people’s memories as “The Crazy Monday”. “The Day for Memorial” it has been called at the coast.

The weather was calm and fine in the morning of the day in question, but as the day progressed, a sudden storm from the northwest blew up with thick snow in the air. On the stretch between Bømlo and Bergen close on 30 yachts and other larger vessels went down, and the small boats fared even worse.

From Fusa and Os there were many who went fishing for herring to Sund and Austevoll. They lived there mostly from January to March, and fished with seines in the west part of the ocean. Few of them had shares in larger vessels, and many of them therefore used four and six-oared rowing boats, with room for two men and their fishing tackle. On 11 March 1822 the spring herring fisheries were almost finished, and many of the boats had already headed home. Nevertheless, there were many who went out also on this day, and it was the small boats from Fusa and Os that were hardest hit by the bad weather.

From Os parish, which at the time included Fusa, Os and Samnanger, 47 men were lost on Crazy Monday. Most of these were from the Fusa communities.

On the quay at Glesvær 1930. (O. Schumann Olsen, owner Billedsamlingen, Universitetsbiblioteket i Bergen (S.O. 1383A)).