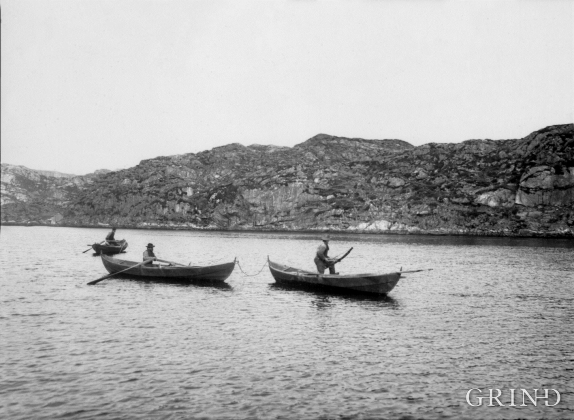 The minke whale didn't have a chance against the whale boats and bacteria-infected arrows, when it became trapped in the bay of Kvalvågen.  Picture from ca. 1890. The Krag Jørgensen rifle was first used ca. 1900. The shooter would be alone in the boat so that he would not be distracted while shooting. The other boat tried to stay still and hold the shooter in position. (Helge Sunde)

Whale in the sound! When this call was heard it was a matter of getting out the strong whale seine and closing off the sound, and so the hunting could start. From times immemorial there has been whale hunting in Skogsvågen.

The 9-10 metre long minkey whale often came in here, and the shape of the sound was such that it was easy to close it off. The hunting method, and not least the rules for how the whale was to be partitioned, followed ancient traditions. Right up until the former century the whale was shot with bows and arrows, a powerful crossbow made of wood. The arrows were poisoned with infested whale meat and the whale died from blood poisoning. Around 1900 rifles started to be used for shooting whale. When the whale had received the fatal shot, but before it died and sank, they had to insert the skutel (a type of hand harpoon) in it in order to tow it to land. It was now time to partition the whale according to detailed rules. The one who had cried “Whale in the sound” was to have one part, the one responsible for the fatal shot, another, the one keeping guard at the seine, another, and for the rest the meat was divided between the farms according to special rules.

The last minkey whale was taken in Skogsvågen in 1960. A thousand years of whaling had come to an end.

After the whale was dragged up on land in the Kvalvikja bay, it was carved up according to ancient, unwritten rules. Photograph from ca. 1926 (Mathias A. Sangolt).

Whale bow from Skogsvåg. With the bow poisoned arrows were shot at the whale. (Egil Korsnes).

In older times whale hunting was done by farmers and fishermen, who chased the small whale on to land or enclosed it in narrow sounds and bays. Hordaland has several well-known whale bays. Around the turn of the former century shoals of several hundred orcas were often enclosed between Bildøya and Sotra. With noise and racket, slaps on the boat side and splashing in the sea, the whales were frightened and chased towards the shore, right up to the tide water stones. Here others stood ready to kill them and partition them. It was a bloody performance, similar to the catch of the pilot whale that is carried out in the Faroes today.

Skogsvågen is probably the best known of the whale bays, because of the special catching method used. It was the smallest of the baleen whales, the minkey whale, that was frightened into Skogsvågen. Also in Tælavåg, on the outer side of Sotra there was a place for catching minkey whale, but it does not appear that poisoned arrows were used here. Place names that contain “whale” often indicate catching places for whale. Whale hunting from land and small boats was in strong decline around the time of WWI. The hunting was taken over by commercial whale hunting from places like the whale station in Blomvåg in Øygarden.