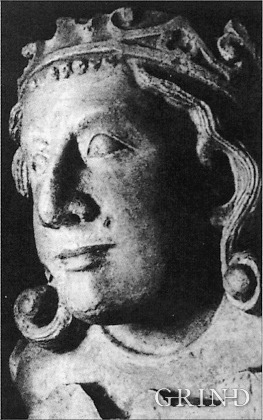 B.E.Bendixen, who has written about “The Churches in Søndre Bergenhus Amt”, believed even around 1900 that there was evidence at Tyssøy of the church or the chapel of the Holy Ludvig (Louis). Two large stone blocks had lain in the western wall of the church’s nave, and this wall showed a length of 16 meters in the terrain.

Today there are few traces of this church site. Håkon V. Magnusson let build 14 chapels at various sites in the country. Tyssøy became a royal estate, and one of the chapels was built here. As a rather unusual arrangement these chapels were placed immediately under the jurisdiction of the king. The bishops did not hold with this arrangement, and bishop Arne Sigurdson in Bergen asked to be excused from consecrating the chapel at Tyssøy. Thus it was Bishop Erland in the Faroes who had to consecrate the chapel. This happened some time between 1305 and 1308. In Vestervågen we find the remains of a wall from a shed, and remains of oak logs have been found where the assignment was to have taken place. These remains were called the “King’s shed” and in accordance with tradition, this is supposedly the shed that belonged to the king’s estate.

The chapel at Tyssøy is the only one in Norway that was consecrated to St. Ludvig. This is an expression of the good relationship between the Norwegian and the French royal houses in the 1200s. Louis IX was king of France in the middle of the 1200s, and brought home to Paris the holy relics (cross and crown of thorns). His son, Pjilip III gave one thorn of the crown to Magnus Lagabøte, who built the third Apostolic church in Bergen for this relic. This church is supposedly inspired by Sainte-Chapelle in Paris.