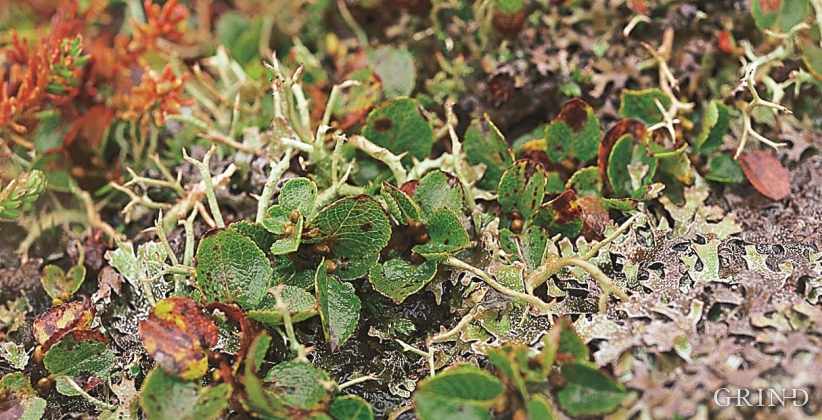 Pygmy willow is believed to have survived for several thousands of years by the side of the big ocean. This little willow plant put down its roots on Golta at the end of the last Ice Age, along with other alpine plants. The others buckled under when the climate grew warmer, but the pygmy willow survived. On the weathered rocks that stick up from the moors on Golta, the growing conditions are much like those in the high mountains.

This plant creeps along the ground and is well suited to this harsh climate with its short growing season. It is most common in the high mountains in places where other plants meet with problems because of longterm snow cover - they thrive best where there is no other sturdy vegetation. In the lowland, pygmy willow is easily out-competed by other plants. But, when there is neither forest, moor nor grass to win over from this little creeper, the pygmy willow can make a living also here.

The moods of autumn

Have you been on the west side of Sotra on a mild and fine autumn day in October? Why not take a Sunday outing here? The landscape is just as open and free as up in the high mountains. And you get the big ocean just outside, at the same time. It is guaranteed not to be crowded. In the autumn there can be beautiful colours on the heather moors, but you have to get close in order to experience them.

The grass mounds have lost their green colour and turned brown, grey or golden. On the top of the stalks of the bog asphodel (picture) you see the orange fruits, that are at least as beautiful as the golden flowers. The stalks stand as upright in the peat soil late in autumn as they do when they flower in the summer time. This is because the seed is not released until out in the winter.

Common heather does not have as much colour, since it tends to be flowerless in October. But, there is hope that one can find flowering heather, nonetheless, since the purple heather hasn't yet withered. This plant stands tall with its red coloured flowers, without noticeable sign of giving in to winter and cold. And the purple heather does not take a long winter rest, either. Not surprising that it thrives far to the west in Sotra, where the cold season is relatively short.

Finds of old tree stumps in bogs are clear evidence that forest once grew here in earlier times. It is not unusual to see such tree stumps in the peat soils on Sotra. During the time when the forest grew here, the earth was much drier than today. Because the roots of the trees drink up a lot of water, there was not much bog area when Sotra was forested. People burned and cleared the forest because they needed grazing land for their animals. After the forest was cleared, heather moors grew in where the water drained away, while bogs spread out over the moister flat areas. After the forest disappeared, there was a shortage of fuel. Therefore, the coastal peoples began to mine the bogs for peat. We figure that there must have been a great deal of peat removed from the bogs on Sotra. When the peat was dug out, erosion increased, and this increased the total area of bog lacking in vegetation. Older layers with soil and hummus came to the surface, and the old tree stumps came into view.