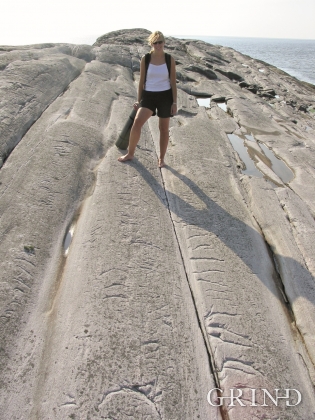 Curvy scours in the bedrock ("chatter marks") and elongated channels are evidence of the ice's scouring effect when the glacier moved west over the gneiss bedrock at Nalen. (Ståle Raunholm)

A SEA OF GNEISS

Over thousands of years, autumn storms and strong land-driving winds have cleaned the bare rocks of Golta. The waves can beat far in over land and make it dangerous to walk along the shoreline. When the storms have calmed, the results of their work comes into view.

There is a lot of gneiss, both in Sund and many of the other municipalities in Hordaland. Where the sea has washed and worked away at the bedrock over long periods of time, the gneiss can be very pretty to look at. The west side of Sotra and Øyegarden are the gneiss's pride and joy. The bedrock in itself is not so special. It is for the most part light, often pale pink granitic gneiss. The layering is the reason that geologists call it a gneiss, but the mineral content is roughly the same as in granite. In between, there are layers with a darker and softer amphibolite gneiss. Nalen, the point outermost on Golta, appears pinkish because it is made of tough granitic gneiss.

All of these rock types belong to the Precambrian basement and are from the earth's oldest Era (the Precambrian). The gneisses were originally magmatic intrusions that, until their alteration, were basic and acidic magmas far below in the earth's crust. Later, but still at great depth, these magmas got pressed together and altered to gneiss. It was the forces that were unleashed during the Caledonian Mountain-building event in Cambro-Silurian time, 400-500 million years ago, that formed the gneisses. Since this time, the mountain chain got eroded down, so powerfully that these deep layers eventually came to the surface.

Much later, the mountains on Golta yet once more were subjected to darkness. This time, it was because of the ice the covered the land. The ice carved and polished the bedrock. Roughly 15,000 years ago, the ice melted away. Finally, Golta mountain saw daylight again - scoured clean by the glacier. Since then, the forces of nature have continued to shape the mountainside, but not so effectively as when the glaciers ruled. The waves themselves have only a slight effect, but in the inlets and bays where the waves carry stones and gravel as their scouring agent, they erode quite effectively. However, the waves ensure that the bedrock remains clean; as long as they constantly work away at the shore, no soil or sprouts will have a chance to accumulate. The smooth coastal rocks out toward the sea therefore gives a good picture of what the bedrock might have looked like, almost anywhere at all in Hordaland, just after the ice receded.

Nearly every rock type can become a gneiss if it gets pressed together under high temperature and pressure. The characteristics of gneiss are that it is massive, has light granitic lenses and layers, preferably alternating with darker, more basic layers richer in biotite or amphibole. (Haakon Fossen)

The green depressions on Golta follow fault zones in the gneiss. Here, it is the mountain ash tree that has gotten a foothold in the rough and open landscape. (Helge Sunde)

At Golta you can travel far to the west, and get a view out toward the big ocean. This gives you also a view out over the main migration routes for the migrant birds. The Northern Gannet (picture) and the Arctic Fulmar that fly by are commonly seen from Golta in the autumn. In contrast to Skogsøyna in Øygarden, you do not need to go far out in the terrain to experience such a sight. (Hallgeir B. Skjelstad)