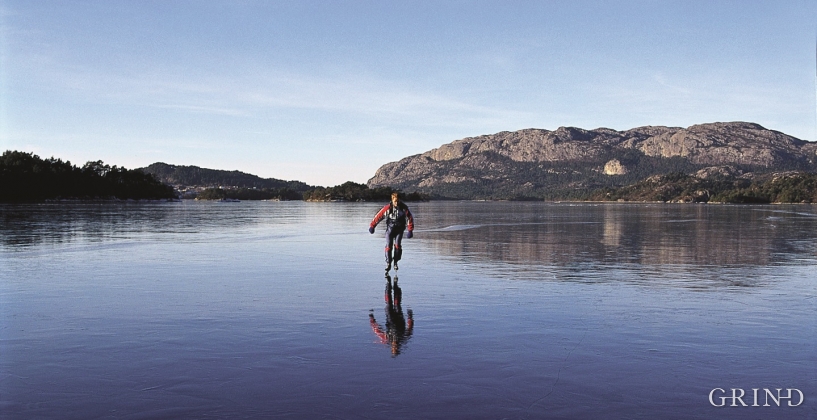 There is a lot of trout and a large char population in Lake Rylandsvatnet. The lake was stocked with char, probably in 1907. The promoters of the project were the family Ameln, who owned eight mills in Rylandsvågen and parts of the Ryland farm.

In the 1930s the char spread to Lake Storavatnet, where there was a healthy population until the 1970s. Since that time, things have changed, and the smaller fish have taken the upper hand. A spawning-mature char today weighs only 160 grammes. It has been recommended to take up 4–5 tonnes of char over a couple of years in order to help the remaining population grow to an acceptable size. The char in Lake Rylandsvatnet has in comparison a fine size. The trout in the water system are of good quality - trout of 5-6 kgs have been caught from Lake Storavatnet.

Near Rosslandspollen, where the Ryland water system reaches the sea, there is an eel-trap that catches all of the eels that are wandering out of the river. On average, this eel will be about 1.5–2.0 kilos in size, and annually about 400–600 kgs will be caught in the trap. In addition, several hundred kgs were caught in Lake Rylandsvatnet.

The world's eel population collapsed around the beginning of the year 2000, and has remained so low that eel is now listed on the Norwegian red list as a threatened species. This decline is especially noticeable in West Norway and not least in the Ryland water system. A smolt-growing plant in Rosslandsvågen bay creates a barrier for the wanderings of the sea trout, but not to nearly the same degree as for the eel. The eel is what we call "catadromous", which means that it lives much of its life in the ocean and only comes into brackish coastal water to spawn, which explains why the decline has been so difficult to detect.  The sharp decline in the eel populations has led to a ban on eel fishing in Norway, except for research purposes.

Lake Storavatnet and the surrounding area is much used for outdoor recreation. Canoeing is a popular way to get around, and there are several fine islets in the lake that are well suited for tent-camping. The pine forest is rich in red deer. On the south side of Lake Storavatnet lies the 107 metre high Gripakletten, with its thick, old pine forest. Many of the trees are high and have straight trunks that are well de-branched on their lower parts, while others are crooked and stout. Parts of this forest grow on deep soil, fed by nutrient-rich amphibolite. Even the thick-trunked pine trees may not be much more than 100 years old when the soil is so fertile. Many pine trees on Gripekletten are nonetheless older than this. Among the heather and moss in this forest, one finds creeping lady's tresses, a rare orchid for Hordaland.

Arnt Brakstad has carried out cultivation work in Lake Storavatnet for 30 years. Every year, in summer and early autumn, he takes up about 1 tonne of char with his fishing net. (Eirik Brekke)

Eel trap at the outlet of the water system. (Svein Nord)