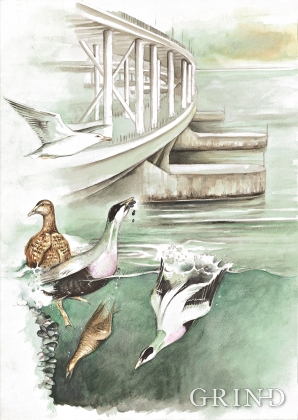 Many of those who drive over the Nordhordland bridge notice that there are many puffins in the sea around the bridge. The reason is that there are mussels, the favourite food of the puffins, growing on the bridge pontoons. (Stein Mortensen)

When the debate about building a pontoon bridge over Salhus Fjord was raging, some were afraid that the bridge would disrupt the ecology of the fjord system inside. The worst predictions did not prove true, but it is easy to see that there was a change: the Puffins have gotten a new food platter after the Nordhordaland bridge was built. Its favourite meal, mussels, thrive on the pontoons that are the foundation for the bridge.

In the past, it was usual that well over a thousand puffins would perch on the wooden docks in Sandviken. There are many fewer there now. The Puffins have settled instead in Eidsvåg in periods. Perhaps this is because of the pollution in By Fjord.

That large flocks of puffins come regularly to the Nordhordland Bridge, is due to other reasons, however. The pontoons on the bridge provide a good substrate for shell larvae to attach to. At the mussel plant, the pieces of rope or "netting stockings" that hang down into the sea serve the same function. During the course of a year, the larvae grow a 3-4 centimetre-long shell. Then it is party time for the puffins if the plant is not protected from these diving guests. The Nordhordland bridge is a warning that there can be many unwelcome visitors at a mussel plant used for aquaculture, and there are generally several others who come during the course of a year.

Without the help of the fish farming or the bridge, puffins would have to find mussels on stones or another more or less firm substrate in the upper layers of the seawater, preferably in places with a lot of current. The shells live on algae and other small nutrient particles that get filtered from the water. Parts of Oster Fjord have always provided good living conditions. That the salt content in the Fjord is low does not pose any problem. It is more important that there is a good current, making life easier, among other ways, by helping to spread the eggs. One mussel produces 5-10 million eggs per year.

The way that they feed makes mussels vulnerable to poisoning, either from toxic algae or from environmental pollutants in the water. This is a well known problem for people, but seldom for birds. It is not easy to see from a shell if it has been poisoned, but many places in the country, the amount of pollutants in the water is measured in the summer, so that people can avoid being poisoned by mussels.

The Nordhordland bridge, which was opened in 1994, is unique among the many bridges around Bergen. 1246 metres of the bridge is pontoon bridge, the longest in the world of its type, but on the Bergen-side there is also a high overhead cable. The transition between the two types of bridge occurs at Klauvskallen, where a pier with a tower is fastened 28 metres below the water's surface, roughly 150 metres from land.

The pontoon bridge is constructed of 11 sections that rest on floating pontoons. The construction was chosen so as to have the least possible negative effect on the environment in the Fjords inside - that is, Sør Fjord, Vea Fjord, Oster Fjord and the various sidearms.

For a number of years before this type of bridge was chosen, there were extensive environmental investigations throughout the whole fjord system. The investigations were intended to give information about the condition of the water masses before and after bridge construction. Several types of bridges were discussed, among them the pontoon construction.

A solution involving a continuous 3-4 metre-deep floating construction was the technologists' first choice. The critics believed that such a construction would lead to reduced circulation in Salhus Fjord. This could in turn lead to an accumulation of - and longer residence time for the brackish water masses to the land side of the bridge. The surface water in these fjords has very little salt to begin with, roughly 4 parts per hundred salt content is measured in Oster Fjord. (May, 2000). A stronger dilution could have had big consequences for the ecosystem, including affecting the living conditions for mussels and aquaculture fish. Increased icing up of the fjord in winter was also predicted.

After a comprehensive evaluation it was concluded that these consequences probably would not have a big effect. Local engagement and political will led nonetheless to the pontoon construction being chosen.