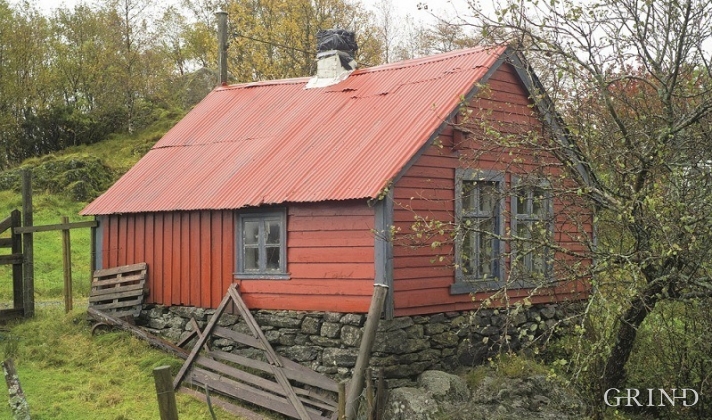 The smithy at Odland. (Svein Nord)

The auger smithies in Odland and Fosse were amongst those which had the largest production of augers in the period between the Wars. Martinus Fosse built a smithy in 1877, and this was in operation right up to the 1980s  - one of the centres for auger production in Meland. In 1930 yet another smithy was built here. There was a smithy at Fossesjøen as early at the 18th century, and at the end of the 19th century they went over to auger smithing. There is still a market for hand-forged augers.

The forging of an auger starts off with the thinning out of the raw material. After that comes the hollowing out of the drilling bit, the forging of the bit, the twisting of the bit with tongs and the forging out into the final shape. Then the tongs are forged to a needle sharp point. Now the drill has to be ground. After the grinding the drill is hardened and tempered. The drill bit is lightly polished on the outside and the inside to get it shiny again after the hardening and tempering. Then the drill is filed so as to get a sharp edge. Finally a birch wood shaft is fitted. The shaft was burnt in by the hot pliers being pushed through the shaft.

The smithy trade has long traditions in Meland and the smiths made axes, adzes for working with barrels and skinning knives for the herring workers. Auger smithing was first taken up in Meland by the great smith Ole Bastesen Gaustad (“Bast Ola”) early in the 19th century. He learned it from the smith in Salhus. The auger smithing spread from Gaustad first to Odland in the 1860s and then on to other farms in Austbygda. Besides Gaustad and Odland auger smithing was practised on the farms of Refsgard, Fosse, Fossesjlen, Flatøy, Hopland, Sagstad, Håtuft. Grasdal, Landsvik, and Hestenes. The auger smiths were most commonly farmers which practised smithing as an occupation in addition to faming. Towards the end of the 19th century, augers were an important source of income for many smiths in Meland. During the period 1900 to 1920 augers were produced in at least 18 smithies. Some of the smithies supplied augers to users in the local area, and had fairly small production. The smithies at Fosse, Odland and Hopland had a large production and supplied larger wholesalers and businesses along the coast from Oslo to Finnmark. Specialisation of the work took place in the inter-war period, and many people worked as smiths for the whole year. Today auger smithing is a dying trade, but the Handicraft Register at Maihaugen Museum (in Lillehammer) has maintained the tradition by training a new auger smith at Gaustad

Good tools are half the job. (Helge Sunde).