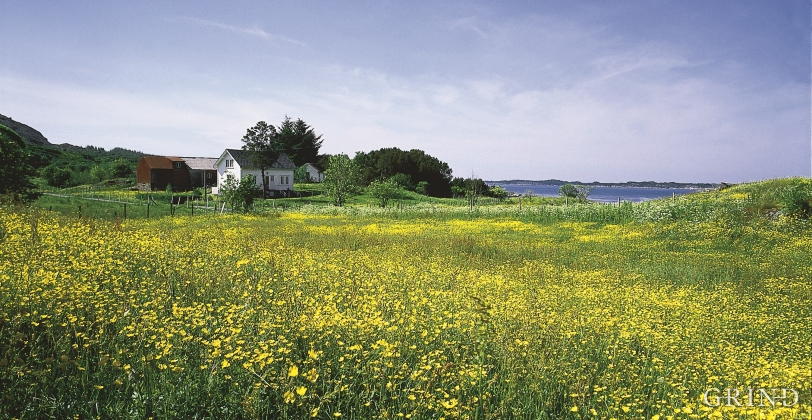 When the Corncrake returned to Nordhordland, it came as no surprise that Husebø was the place it chose. Here, remnants of the old cultural landscape are still in good condition. And the Corncrake is not alone in appreciating this.

In 1997, a Corncrake settled down in a lush meadow. Its behaviour suggested that she perhaps was looking to nest. So rare was this in our time that the authorities gave the farmer money for delaying his harvest and to actually buy food for the animal.

The farms at Husebø are small. In the past, fishing was the main livelihood - now it is rather farming that provides the supplementary income, with other work on the land as the main source of employment. A few farms still do farming full-time, first and foremost milk production, and these often rent land from the others.

There are still dirt roads that have been left undisturbed at Husebø, and many of the old barns are in use. The bird life is lively. Curlews come right down to the barns, Twites sit on most of the fence posts, Starlings are everywhere, and the Sparrow Hawk is a frequent visitor. The horned owl does not nest here, but he comes regularly to inspect. Inside of essentially all of the barns, you will find nesting Barn Swallows, most often more than usual for these parts. This is a sign of good insect production.

Whether or not the Corncrake really nested and raised a flock of young in 1997 is unknown. But, she must have felt appreciated. She returned namely to the same barn the year after. Nothing like this has happened in Hordaland since the 1970s, when the species disappeared as a regular nesting bird from our county.

Whitethroat. This little bird is common in the thick undergrowth at the edge of the cultural landscape. (Jan Rabben)

Hay-making is essentially a thing of the past at Husebø; here, as everywhere else, the grass goes goes right into silage balls. Anna Olsdatter Husebø (1849–1932) making hay at Husebø, roughly 1930. Everyone had to help with the harvest, young as well as old.

The farms on the west side of Husebø bay lie on moraine soil. The deposits were laid down in front of edge of the glacier simultaneously as the Herdla moraine was created. From Herdla the moraine goes up over Herdlaflaket and comes up on dry land in Meland municipality at Ringholmen and by Skjelanger. The glacier pushed up most of the moraine soil at Husebø.

Since both of the areas at Skjelanger and Husebø lay under sea level, which at that time was about 35 metres higher than today, the soil contains relatively much clay. Silt (coarser clay), that the river under the glacier had been transporting, was deposited on the sea bottom. Silt deposits are exposed in terraces with small stream valleys, north of the crossing where the road takes off to Husebø, and further on toward Skjelanger.