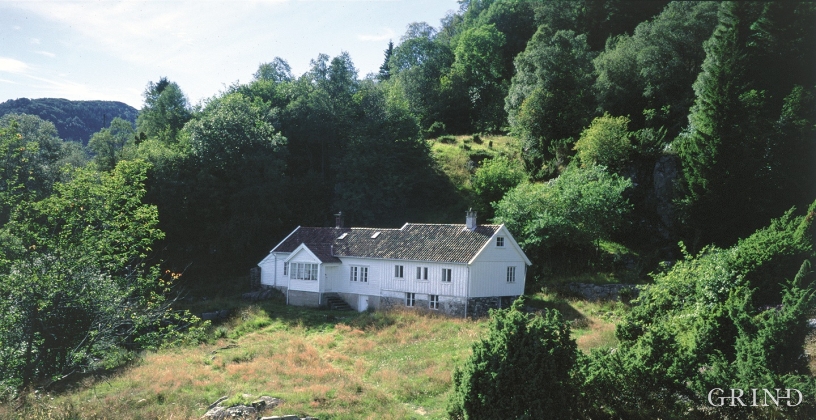 Today, Håøyna is a fine area for enjoying the outdoors. The oldest part of the commanding officer's home (left half) is thought to have been build before 1900 (Svein Nord).

Håøy lies centrally in one of the main shipping lanes going into Bergen --- with Håyøsund on the south side facing Meland, and Hagelsundet facing Lindåslandet. Names like Nordfarskista and Nordfarsskorane explain things. The strategic position was important in Viking times and it has been important in our days too. The beacon on Håøy can have been built in the establishment of the coastal administration in Håkon the Good’s time, about 950 AD. The defence structure of which we say remains on Håøy Summit held a critical position during Norwegian neutrality during the First World War. The defence structure was taken down in 1957.

From ancient times Håøy belonged to the King’s estates; leased in 1590 by a settler under the title to the farm of Flatøy. The farm buildings standing there today are from the 19th century. Towards the end of the 19th century the Håøy defence facilities were built, while Norway was still in union with Sweden. Thus the structure was a part of the defence of the city and belonged to Bergen’s outer fortifications. The mine department which could detonate the mines which were laid in the sound, was situated in the Håøy Sound. On Håøy Summit there was an artillery division, with cannon positions, floodlighting facilities and a signalling station. We still see many remains of these, and there is a road all the way to the tiop. Here at the beacon, there is an extensive view northwards up the shipping lane which shows to the full the strategic value that the defence facilities have had over a period of 1,000 years.

There is a great view from the Håøy Summit. Alverstraumen is on the right in the picture. (Svein Nord)

King Sverre and his men

Sverre’s Saga says of the conflict between the Heklungs and the Birkebeiner and the attack on Magnus Erlingsson who sat in Bergen in 1183:

“Everyone chose to travel to Bergen. Then the king sent some vessels into Ulvesund, and the king himself sailed offshore. Inside Ulvesund, the Birkebeiner captured two of the Heklungs’ ships, and killed most of them but showed mercy to some men so that they could get news from them. They told that three vessels were lying on watch in Langøysundet, and there was a beacon on the south of HÅØYA and one on Askøy; and from them they could look right into the city. They also said that the whole army slept in the city, and they told them in which buildings the important folk slept, their ships lay under sail outside the moorings. They brought this news now to King Sverre.

The king sent people ahead on the ships that the Heklung had owned, and first of all these boats went southwards. When the ships came sailing in north of Drevøy, the Heklung recognised both the ships and the shields, and thought it was their people. But as soon as the ships came in the Birkebeiner began to shoot; the Heklung jumped on land and some were killed. The Birkebeiner then took the ships and all that was on them and waited there on their king. Afterwards they kept to the southern ship lane. Again the king sent the ships which the Heklung had owned, and asked them to take the beacon on Håøya. But the Birkebeiner were wanting to go hunting and rowed faster than the king wanted, so that the guard saw them, and he lit the beacon. So they rowed south under cover of the land; because there was a shadow of the mountain on the sea.”