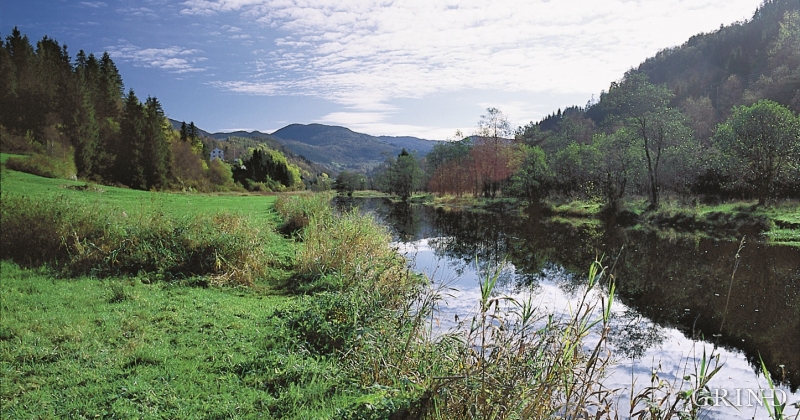 It is said that the salmon populations with the largest and the smallest salmon in the world both come from the waters that run out into the fjord system around Osterøy. Vosso is supposed to have the largest spawning salmon to be found in any river, whereas Lonelva is said to have the smallest.

In the valley toward Lonevågen, the grassy hills stretch up the slopes and go over to leafy forest and spruce to give the valley a tone of sparkling green. In the middle of this, Lonelva river flows through the flat-lying fields. The river is perhaps one of the most insignificant salmon rivers in the country, with respect to its length and water volume. The water volume is in fact so little that there simply is not room for any big salmon. But, the Osterøy-salmon has adapted to the cramped living conditions, through genetic selection.

In Hordaland, the salmon usually spawn in October–November. The fish fry remain in the spawning river for several years before turning into smolt and wandering out into the sea. The growth is to a large degree dependent on the water temperature. In western Norway, it usually takes about 3 years before the smolt wander out of their home river. In a "warm" lowland waterway such as Oselva, it happens faster - most often after two years. Also in Lonelva, much of the water supply comes from lower-lying areas, such that the migration of the smolt occurs faster than normal.

On average, the weight of a young salmon that is ready to wander from home is under 25 grammes, while its length can vary from 11 to 22 centimetres. The salmon does not begin to grow significantly before it comes out in the sea. But also out in the sea, there can be large variations in the pace of growth. After one year the weight generally increases to 4-8 kilos. And after three years the salmon weighs about 8-13 kilos.

In Lonelva the average length of a youngster leaving home has varied between 13 and 14 centimetres for many years. It is out in the sea that the Lonelva-salmon shows fully which genes he is made of. After a year the mini-salmon weighs just 1.45 kilos, on average. And after three years in the sea, the average weight stops at a modest 2.49 kilos. The salmon returns to its river of birth to spawn after 1-4 years in the sea. The fisherman that wait at Osterøy are not aiming to catch the big salmon. In return, they can expect to catch more fish than in many other rivers. Salmon weighing 1-2 kilos and sea trout just under 1 kilo are abundant in Loneleva. In the 1980s, Lone-river salmon were set out in the Akerselva-river in Oslo.

This smaller salmon stock has managed better than many of the bigger species during the critical period from the 1980s to the 1990s. In Vosso it is an advantage to be big. In Lonelva it is a stipulation to be little. And why be big when one is just as happy being little?