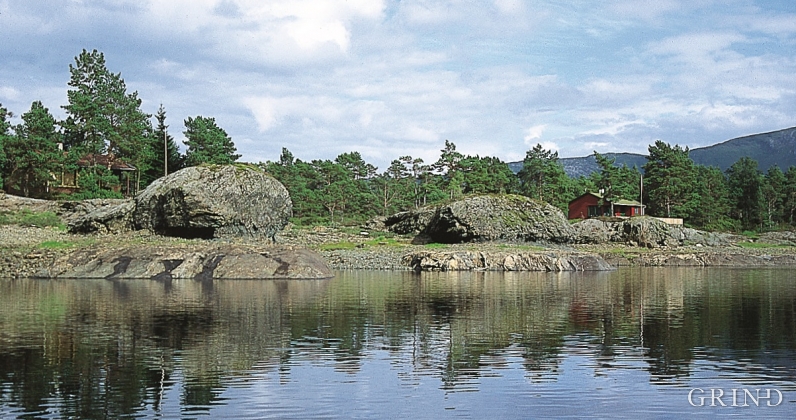 SHELVES AROUND THE SHORE OF STORAVATNET

The regulation of Lake Storavatnet has created a rare geological phenomenon: When Herlandsfossen power station taps the reservoir during the spring and summer, the old shoreline of hard bedrock comes into view.

From the picnic area in Selvik, by the north end of Vestrevatnet, we see a shelf below the cabins along the shore. The shelf, which slopes gently toward the water, is 6-8 metres at its widest part. At a point just about two kilometres from the picnic area there are small caves in the bedrock shelf. The caves run both along and across the direction of the shelf.

The shelf is carved into the mountainside that belongs to the Big Bergen Arc, where there are rock types that easily smoulder up: amphibolite, which is a metamosphozed type of lava, and calcium-rich mica schist. Frost-weathering in the shore zone through 5000-6000 years has created this rock shelf. The process continued right up until the water became regulated in 1920.

The rock surface under the flat bogs in the Herlandsnesjane nature preserve may have been formed in the same way as the shelf along Storavatnet. But, since this rock surface lies 8-10 metres higher than the lake, both the water level and the discharge must have been higher when this surface was created. It takes a long time to make such a large surface - erosion and planing of the ground by frost weathering must have occurred over large parts of the Quaternary when the inland ice did not cover Osterøy.