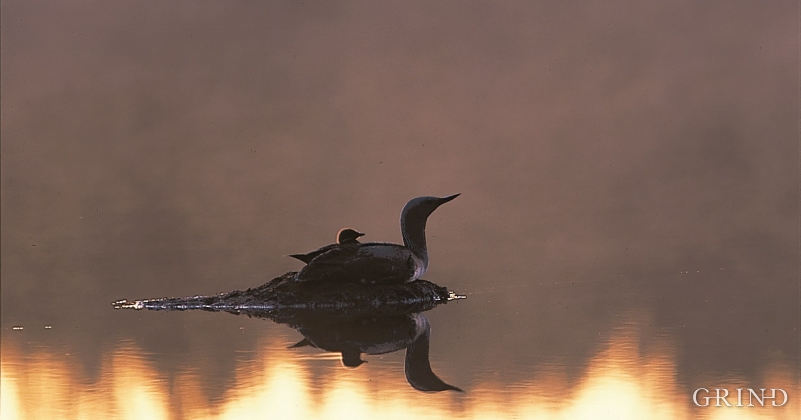 The troll-like sounds from the Red-throated diver carry long distances between the mountains around Storavatnet. The high-pitched, haunting screeches on quiet evenings in May are a sign that the mating season has begun.

The nesting population of Red-throated Diver in Hordaland is believed to be on the order of 10-20 pairs. Several of these are to be found on Osterøy, where they gather much of their food from Lake Storavatnet and other fish-rich lakes in the large boggy landscape that surrounds this lake.

Small trout and stickleback are abundant in these waters, providing reliable access to food for the Red-throated divers. A full-grown bird can weigh a kilo and a half and needs much food through the long nesting season. One Red-throated Diver that was shot on the coast in winter had 66 average-sized (8 cm) pilchards in his gut. Such eager fisherfolk are needed in Storavatnet - test-fishing has shown that the lake has a larger than desirable density of fish, with a lot of small fish of around 100 grammes. The fish are free, also for people, who like to paddle out on the lake in their canoes.

The Red-throated Divers do not nest on Lake Storavatnet. This would not be possible, since the regulations require the water level to sink several metres during the summer. The bird species is so heavy behind and clumsy on land that the nest has to be built right into the water's edge. Therefore, the diver finds its nesting places in smaller and out of the way tarns, where the birds are well hidden. This is important, because the species is very vulnerable during nesting time.

You can see the Red-throated Diver in the area the whole time from April to September. It is best to see them late in the evening or early in the morning, in spring or early summer. If you cannot see him, you can hear her. There is most sound in mating season, but also when the female is sitting on her eggs, her mate keeps contact through his cackling. From a distance the Red-throated Diver can be confused with the Red-breasted Merganser, which there also are a lot of on Herlandsnesjane and by Lake Storavatnet. If you awaken early, you will be able to hear the calls of the Black Grouse from the hills around Herlandsjesjane. There are also Capercaillie in the pine forest, and good populations of Jays and White-backed Woodpeckers.