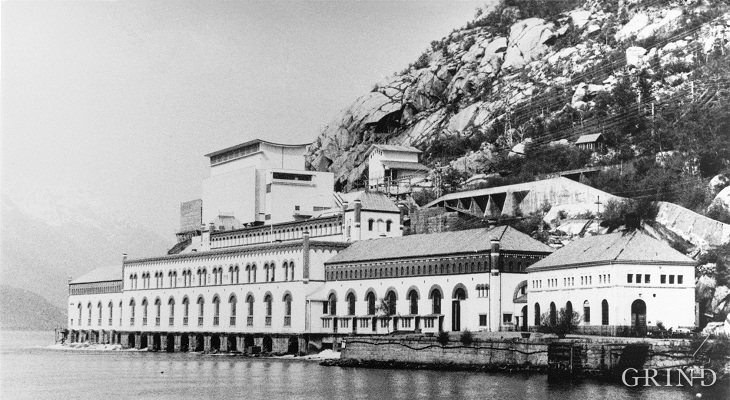 Tyssedal power station, built in 1908, designed by Thorvald Astrup and Victor Nordan, one of Norway’s most monumental industrial buildings, is protected as an industrial monument. (owner: Riksantikvaren (Ark nr. B 276)).

Today Tyssedal appears like a classical industrial community, a picture of modern Norway from the turn of the former century until today. A/S Tyssefaldene was established in 1906, and on 1 May 1908 Tyssedal power station was put into operation. The work on the first stage of the facility was completed in a short time, with a work force of 500 men. They built water tunnels, regulation reservoirs, power station, penstocks, harbour, cableways, office buildings, houses and 6 km of power lines in the wild mountains above Odda to provide the new melting plant with power.

The entrepreneur Sam Eyde, the founder of Norsk Hydro, was the first director-general of A/S Tyssefaldene. His successor, Ragnvald Blakstad, implemented complete development of the power station and Ringedalsdammen. This reservoir facility, in cut natural granite, 520 m long and 33 m high, was Norway’s largest when completed in 1918. Most of the buildings at Tyssefaldene are from the period 1912-1917, designed by well-known Norwegian architects, such as Morgenstierne & Eide, Thorvald Astrup and Victor Nordan. “The Administration Hotel” the community hall, “The Festivity”, the office block, Tveitahaugen garden city, and other housing areas date from this time.

Det Norske Nitridaktieselskap, which operated Eydehavn, built an aluminium plant in Tyssedal in 1916. This was in production up to 1981, but was pulled down to make room for the melting plant, for titaniferous ore, TTI, which extracts iron from ilmenite. The main product is titanium dioxide clinker, for the pigmentation industry. The industrial community of Tyssedal has lived through changing times. On the farms Tyssedal and Tyssedalstveit lived approximately 30 people before the power development started. The population in Tyssedal was around 1,500 at its highest, and today is roughly 800. Today Tyssedal power station has come under protection. The Administration building is the main building for Odda Industristadmuseum, which also comprises workers’ houses in Odda and a historic industrial archive.

The Tyssedal community around 1920; the workers below and the officials above. (T. Lofthus, owner: Universitetsmuseet i Bergen (Lo. 088)).