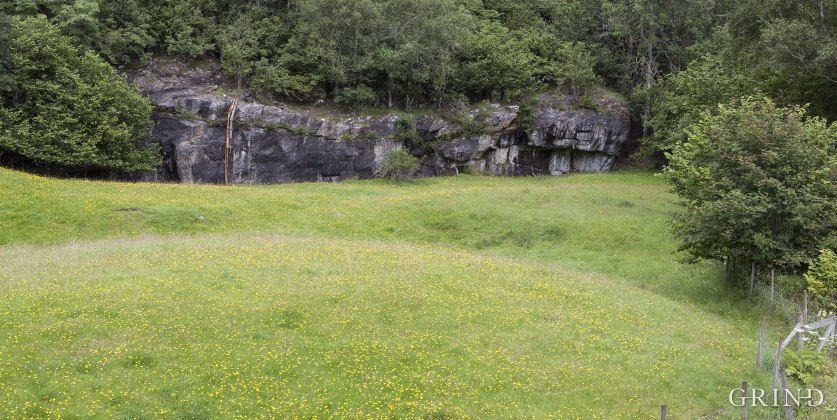 From a soapstone quarry at Lykling. The pasture in the foreground hides tailings from the quarrying activity. Soapstone was taken out from the wall of bedrock in the background. (Svein Nord).

At Lykling, behind the boathouse before the place where the road leads up toward the gold mines, there is a soapstone quarry. In the cliff face at the end of the undulating field we can see the characteristic signs of quarrying soapstone blocks for building stones, a much sought after material in Viking times for churches and cloisters. Deep grooves were cut on the sides of the blocks that were to be taken out. The remains of such grooves - and carvings - and slots - are still visible. Beneath the field on the front side of the quarry lies a scrap pile left over from the mining operations.

We figure that this was one of the biggest quarries in Hordaland in the 1100s, and that stone from here was delivered to Moster Church and to Maria Church, Domkirke Cathedral, Korskirken Church and Nonneseter cloister in Bergen.