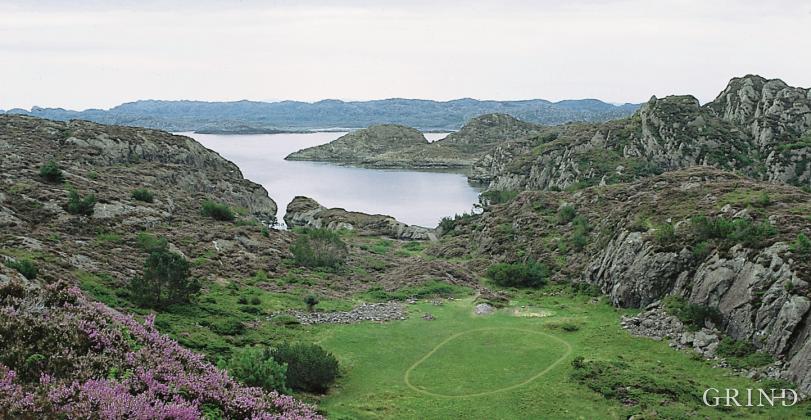 In Svartaneset on the west side of Espevær in October of 1975, a large oval imprint was discovered in an undulating field, where the grass had been flattened in the same direction all the way around the whole ring. The imprint resembled a 40 centimetre wide path, and the earth was depressed by about 10 centimetres. The ring had a diameter of 64 metres, a length of 26 metres and was 16 metres wide at its widest point. The ring is still clearly visible in the terrain. But what was it?

There have been many theories. When it was disproved early on that an aircraft had made the imprint, folk began to talk about the possibility that an unidentified flying object - a UFO - could have landed at Espevær. Others have suggested that the ring could have been created by ball-lightning, an unusual type of lightning that appears as luminous balls. Ball-lightning is often brought forth to explain UFO-reports, despite the fact that science has not fully been able to explain how and why such lightning occurs. If the lightning is responsible also for this occurrence, then the mystery is still unresolved. How can a lightning make a round-shaped imprint on the ground?

We see forms similar to those at Espevær on some lawns and grassy fields in the form of egg- or horseshoe-shaped imprints in the vegetation. The imprints are reminiscent of a well-travelled path of dead grass, but with a zone of extra-lush grass on each side. This phenomenon is called "witches ring", and comes from a species of mushroom that grows in a ring-shaped pattern. The zone with lush grass occurs because the mushroom gives off large quantities of a mineral that the grass likes, while the mushroom has used up the nutrients in the dead zone. As the mushroom grows, the ring expands. The ring at Espevær has not expanded in all of these years, and soil samples also cast doubt on the theory that the imprint could be caused by mushroom growth.

The mystery at Espevær remains unresolved. No scientist has yet been able to satisfactorily answer the question of how the ring was formed.