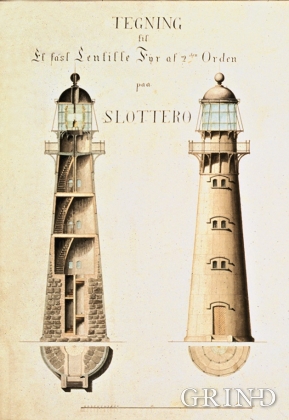 Slåtterøy lighthouse, drawn in 1858 by lighthouse director Carl Frederik Diriks («Lighthouse Diriks»). This was the second cast iron lighthouse in Hordaland, built in 1859. Hellisøy in Fedje was the first. The lighthouse on Slåtterøy was delivered by Næs Ironworks and the cast iron from a factory at Bærum (Bærums Verk).  In 1958 the country's most powerful electric lights were installed in the lighthouse.