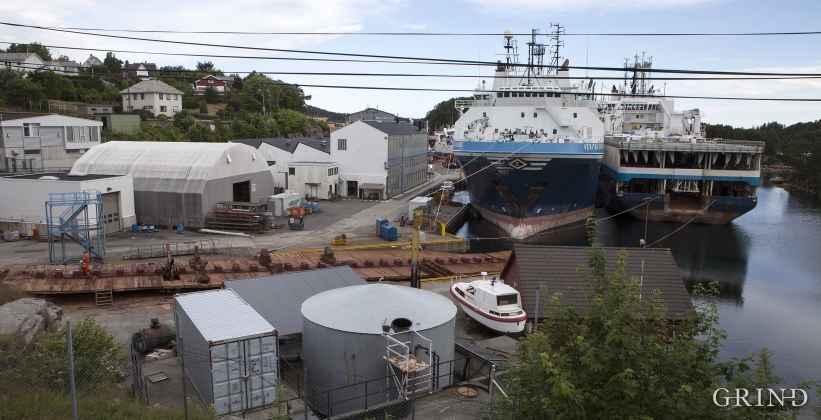 From Rubbestadneset. The old motor factory in the middle of the picture (Svein Nord).

THE ENGINE FACTORY AT RUBBESTADNESET

The blacksmith Martinius Haldorsen started the production of cartwheels in his smithy at Rubbestadneset. At the beginning he used a windmill for powering, but as production increased it required a better energy source. In 1902 the wheel factory therefore bought a used engine from Stavanger. Haldor, the eldest son, was given the task of looking after the engine. Through this work the young Haldor obtained a good insight into the mechanisms of the internal combustion engine.

Haldor often had to row to the merchant in Foldrøyhamn, and it did not take long before the idea of making an engine for the boat took hold of him. In the winter of 1902 the engine was ready to be tried out, and soon afterwards it was installed in a boat.

The rumour of this engine spread rapidly. At this time the first engines from abroad started arriving in Bømlo, and the interest for this new technology was on the increase. Haldor soon received orders from people in the district. The wheel factory became an engine factory.

The German name of “Wichmann” entered into the Haldorsen family from Fijar, and was used as name for the new engine. The Wichmann-engines were simple and robust, and had a construction that gave them more horsepower than they were sold as. They soon achieved a reputation amongst the fishermen of being reliable engines.

The factory enjoyed steady expansion through the last century and became very important for the local community. Today Wärtsilä Wichmann Diesel A/S a business with 300 employees. The engine, Wichmann 28, is supplied to vessels at home and abroad. The old smithy, the core of the first industrial enterprise, has been moved out of the factory and restored as a museum.