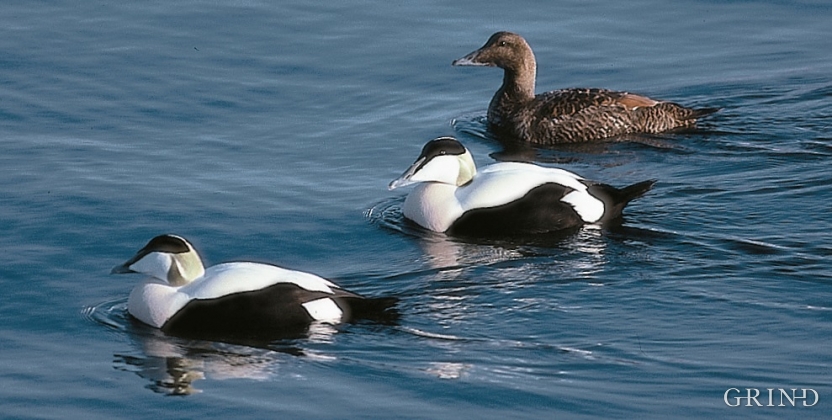 The eider population at Bømlo has increased sharply during the last decade. (Jan Rabben)

SØRØYANE - THE MOST IMPORTANT SEABIRD LOCALITY IN HORDALAND

At nesting time trespass is prohibited at Sørøyane, farthest to the south in Hordaland.  Those who can manage this tough seaside terrain are permitted to pass at a distance of at least 50 metres from the teeming bird life on the islet. From this distance it is mostly gulls, common eider and cormorants (shags) that you will see.

Next after the black-capped gull and the herring gull, the cormorant (shag) is the most common nesting bird on the islands. In the year 2000, nearly 250 pairs of these elegant birds nested on the island group. The numbers are much the same today. Their nests are situated far inside of the cracks between the rocks or in the scree.  A rotten fish smell is noticeable from a long distance away.  At the least provocation, a nesting bird will squirt its stomach contents at uninvited visitors.

The Great Cormorant established itself as a nesting bird at Søryane sometime between 2005 and 2011 The Shag nests in more open areas than the Great Cormorant, and now there are about 100 pairs nesting here. This species has expanded a lot in southern Norway during the past decade, and Sørøyane is one of two relatively newly established nesting colonies in Hordaland.

In the sea outside of the islands you can see small flocks of black guillemots. Sørøyane is the most important locality for this auk bird in Hordaland, but it seems to have declined sharply, also here.  These islands are the only place in the county where we also find a little nesting colony of puffins. The Arctic fulmar is a new migrant at what seems to be the first and so far only nesting site for this tube-nosed seabird in Hordaland. There were about ten nesting pairs in the year 2000.

Birds are high up in the food chain. The size of the bird population reveals much about the ecological interrelationships. If the birds are doing well, then probably the rest of nature is doing well, too.

The collapse of the Atlantic herring stocks in the 1970s and of capelin in the Barents Sea in the middle of the 1980s could have been predicted in advance by observing the seabirds. When the collapse really took hold, the seabirds in that area had already been experiencing a food crisis for several years. Had the authorities paid attention to the warnings from the birds, then the consequences for both society and nature would not have been as serious or long-lasting. In this way, nature is quite predictable: if the harvest is too great, there will be too little left over for the other organisms that are dependent on the same resource. One must then build up the population again from the bottom of the food chain in order to preserve the biological diversity.

Even though the herring today shows signs of coming back to our coast, several of the seabird species are nonetheless diminished. For example, the populations of black-capped gulls are sharply reduced, and several colonies are totally gone. Also the black guillemot, common gull and the Arctic tern have declined considerably on the coast, and the populations of Arctic skua today number just 1-3 nesting pairs in all of Hordaland. One reckons that local depletion of the food web is one of the most important reasons. Fortunately, there are other species that are on the increase. For the time being, the common eider and cormorant are the best example of these, even though we don't exactly understand why they are doing better.

There are no bird mountains in Hordaland, probably because the nutrient-rich coastal currents don't come near enough to the coast here. The closest we come is a rock wall at Geitung in Bømlo. Here one finds the only kittiwake colony in Hordaland. It was established in 1992 and we know that at least three of the birds come from the colony at Spannholmane by Utsira. In 1995 the colony at Geitung was up to 35 nests, but in 1999 the population was reduced to 12 nests, and the year after, the locality was abandoned.

Nesting birds are quite vulnerable during the nesting season. Recreational use of the coast in summer and the increasing small boat traffic threatens the peace that the nesting birds need. In 1987, therefore, 70 seabird reservations were established in the county, where protection of the birds is so highly prioritized that people are not allowed to go onshore. The municipality of Bømlo has the county's highest number of bird reservations. Here, there are 12 seabird reserves that are spread over about 60 small and larger islets.

With about 6500 islands, islets and  protruding rock exposures, our county has good  conditions for a number of  seabird species. Sadly  many of these species have experienced a serious food shortage along our coasts. Therefore, many of the earlier identified seabird colonies have been abandoned, temporarily or permanently. The most important of those that remain were made into seabird reservations in 1987. Here, it is forbidden to trespass on land and in a protective zone extending 50 metres outside of the reservation's perimeter, during the period from the 15th of April through the 31st of July.

The nesting populations of seabirds in Hordaland 1980 and 2003 (pairs).

On high headlands out on the bare rocky coast, with a fine view, one often finds free-standing tufts of grass on bare bedrock. Here sit the seabirds, most often gulls, and scout for shoals of fish or fishing boats on their way in. When they have caught a fish or perhaps shellfish, they fly back to their lookout to eat it, deposit the remains and leave their excrement. The plants that grow here tolerate high levels of nutrients. Some of them form mounds, like sea thrift and various grasses, while others grow on top of the mounds, without building them up. The mounds can be nearly a metre high and several metres across. But, if they get too high, they will eventually topple and blow away.