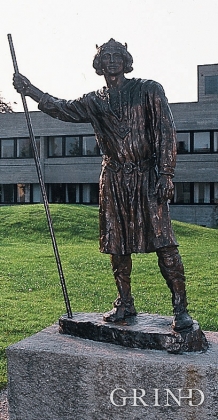 Statue of Magnus Erlingsson by the Town Hall in Etne. (Svein Nord)

High above the sea and the beach flats, on one of the wide terraces shaped by the sea and the ice, lies the farm Støle (Stødle). The Old Norse name of Studla is derived from studill “support, shelf”. As far back as Viking times Støle has been a chieftain’s farm, a good farm on the plains formed by the moraine masses.

The mighty clan at Støle were vital supporters of the royal power. Snorre speaks of Bjørn From Studla who was in the forefront with Olav Tryggvason in the battle at Svolder. In the Saga of Orkney is mentioned the Orkney earl Ragnvald Kale’s good friend “Kyrpinga-Orm” and his two sons, Ogmund and Erling. That same Erling acquired the nickname “Skakke” (askew) after he sustained a sword cut in his throat during a pilgrimage in 1152-55 together with Ragnvald Jarl. Erling was married to the daughter of Sigurd Jorsalfar, Kristin; he became an earl and the king’s representative, and made a mark on Norwegian politics through the 12th century. Erling’s son, Magnus (1156-1184), was crowned king in Bergen in 1164, and we must assume that the young boy from Etne, Magnus, who became a king at the tender age of 8 years, was christened in this very church at Støle, the private chapel of Erling Skakke. Until Erling died at Kalvskinnet in 1179 and the battle of Fimreite in 1184, where Magnus Erlingsson received his fatal blow, the Stødle clan were in the forefront of national politics.

In the autumn of 1953 a bronze ring was found in a bog one metre down at Støle. The ring is made from a twisted and ring-formed bronze rod, which at each end finish in pointed, oval plates. The plates end in two spirals that are hooked into each other.

The ring is more or less exactly of the kind that is known from several finds in South Scandinavia and in Central Europe. They can be dated to the younger Bronze Age approximately 700 years BC, and they have been used as necklaces with the plates and the spirals turned backwards towards the back of the neck. From what we can see this is a woman’s piece of jewellery.

The conditions of the find indicate that the necklace is placed in the spot intentionally, as a sacrifice. It was placed on a stone in a gravel bed, and must have lain there quite visible until the bog covered it.

Women’s jewellery is a far from rare sight in sacrificial finds from the younger Bronze Age in Denmark, Southern Sweden and parts of Southern Norway. Necklaces are especially prevalent, but also bracelets and certain types of belt clasps. Many experts believe these pieces of women’s jewellery are sacrifices to a certain deity. It is also claimed that a depiction of her has been found in some bronze statuettes from youngest Bronze Age, as known from several finds in Denmark. These statuettes show a woman with a large ring around her neck. Some people have called her the “Goddess with the necklace”.

In a Norwegian context this find is both a rare and an exotic find. The ring has been produced in Central Europe and has ended up in Norway via Denmark. It must have represented a great amount of capital for the person who owned it, and which gave it away some 2,700 years ago – perhaps as a sacrifice to the ”Goddess with the necklace”.

The necklace is now in Bergen Historical Museum.