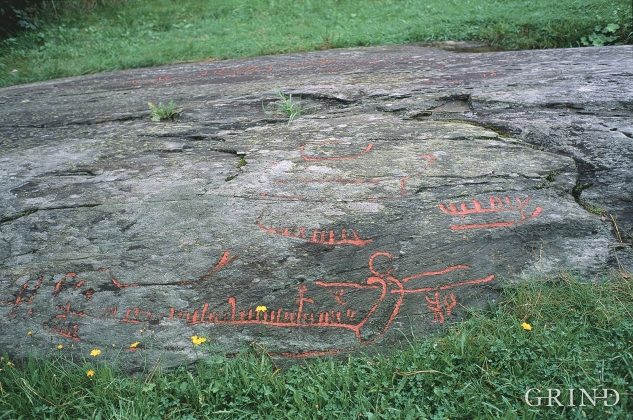 AN ALTERNATIVE “WEDDING PARTY” IN HARDANGER

Everyone knows the famous painting by Tidemand & Gude “Brudeferden i Hardanger” (The Wedding Party in Hardanger) one of the great icons in the National Gallery. Some have, in a humorous lack of respect for this masterpiece linked the concept of “bride’s passage” to another pictorial presentation in Hardanger. This is found on the farm Bakko in Herand, carved in the rock by an unknown artist around 3,000 years ago.

Here are pictures of ships, rings and geometric figures, and unlike what is normally found in West Norwegian rock carvings – a great amount of people. In all 23 human figures have been found on the rock faces at Bakko. Among these are several depicted in pairs. The powerful sexual portrayal of one of the figures in each pair leaves little doubt that the Bronze Age artist has sought to portray a man and a woman in the sexual act. In some cases the pairs are placed one after another, almost as in a procession.

It is natural to wonder why such motifs were carved into the rock, clearly intended to be visible for passers by. Was it a prank, such as we sometimes see today on walls in waiting rooms or public lavatories? Was it the graffiti of the Bronze Age, or were there other intentions behind?

Some researchers find it likely that depictions like these are related to cult actions, and that these pictures have to do with a set of thoughts and concepts that concern cultivation and fertility in the human sphere as well as in the sphere of animals and plants.

Most of the rock carvings at Bakko are found on two rock faces in a dip in the valley just below the highway.