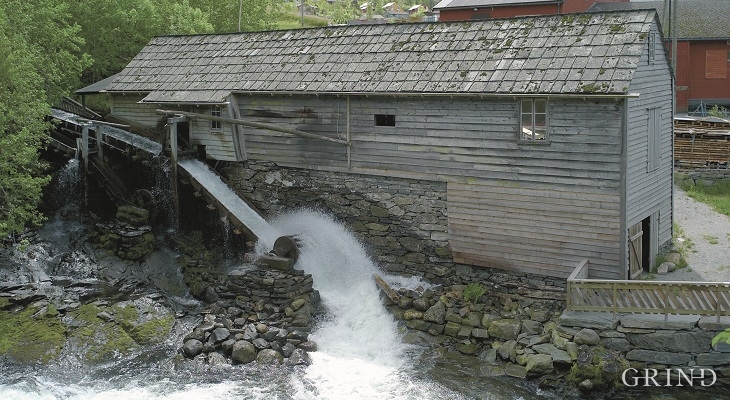 Both the sash-saw and the circular saw are powered by water. (Svein Nord).

Tveiti sawmill in Herand is probably the last water-powered sash-saw in the country that has been in regular operation up to our time. There has been a sash-saw here since the 1700s, and on the other side of the river there are remains of an even older saw.

The sawmill that stands here is a multi-blade saw with room for 8 blades in saw frame (sagramme). In this way it was possible to cut several planks from an entire log in one go, a more efficient system than the old – one-bladed sash-saws as the one at Stekka in Kvam. The Tveiti sawmill has both a sash-saw and a circular saw, each powered by its own undershot water wheel. The saw is situated close to the fjord. Formerly there were both a log heap (saghop) and a log pulley (tømmeroppdrag) in front of the saw. These have now disappeared, filled in by the excavation material from the building of a large fish-farming facility in front of the saw, one of the difficult compromises between conservation and development of new workplaces. There has also been a water mare for the sawmill – a large waterwheel with a chain that pulled the logs out of the sea and the log heap. The sash saw was in full operation until the end of 1970, and provided wide planks for the boat builders. This is one of the reasons why the sash saw has been kept going in these settlements for so long.

Tveiti sawmill has been preserved as a technical cultural monument, and was reopened in 1992 after being restored. The plan is to employ a saw-master for the operation of the sawmill, in cooperation with Hardanger Museum, and the boat-building school in Jondal.