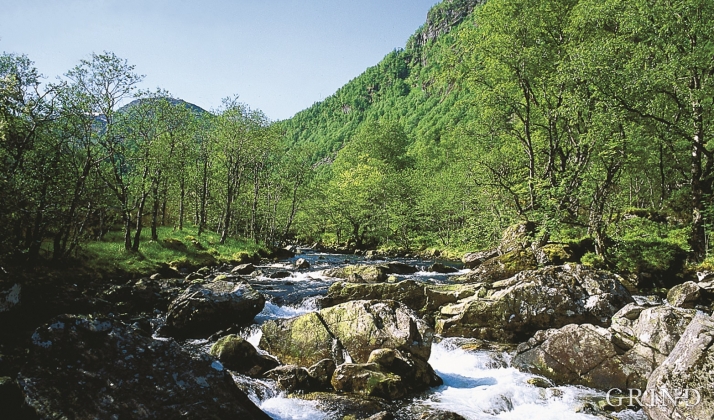 Gray alder forest and birch forest along the river above Tveddal. (Svein Nord)

BIRDSONG AMIDST THE RAPIDS

The grey alder forest down by the river in Stølsdalen is full of life. The many birds are very busy finding enough to eat from day to day – but the biggest challenge is to make oneself heard above the roar of the Stølselva River.

The birds in the valley all solve the problem in a different way. Few birds live in a noisier environment than the dipper. On the other hand, few species have such a sharp and penetrating song. When the dipper fights with its neighbour, or gets scolded by its mate for the small fish it brings home, everyone hears about it. The sandpiper, who continuously patrols its territory along the river, is almost never quiet. An intruder is left in no doubt as to whether it might be best to try another location. The chatter of the fieldfare nesting in colonies in the alder forest, is also easy to hear above the roar of the river. The wagtail, who happily plucks insects from the water, does not have a sharp song. She makes her way to the farm meadow, a bit away from the river, to build her nest. It’s best that the young can hear what is being said, and when they must be still.

Rrrryyyyyyyyyt! is a common sound in the birch forest just a bit higher up. This is the strong and effective, but perhaps not so pretty song of the brambling. This is the most common hedge dweller in such a forest. You might see this species on the birdfeeder in winter, if you put out birdseed. The redpoll might also be living on the same hillside. This little finch is more nomadic; some years it will nest in big numbers, while in other years it is hardly seen at all and perhaps nests in a totally different part of the country. The seeding of the birch steers its choice of nesting site. The redpoll is also easy to recognize by its song.

The valley from Tveddal up toward Breisete is a good example of a typical west Norwegian mountain farm valley. The mountain dairy farm at Tveddal is still active, and the sheep and cows that still graze here in the summer do their bit to ensure that the vegetation doesn’t grow back entirely. The lush alder forest teeming with bird life along the river remains open because of the grazing. Upward along the valley sides, and also with increasing altitude up the valley, birch takes over. From Breisete and further in toward Lake Nipevatnet and Kvanndalen, one sees mostly twisted forests of birch in the blueberry terrain.

The roar of the Stølsdalselv River will disappear if the plans for building a power station at Torsnesvassdraget become a reality. Breisete in the background. (Svein Nord)