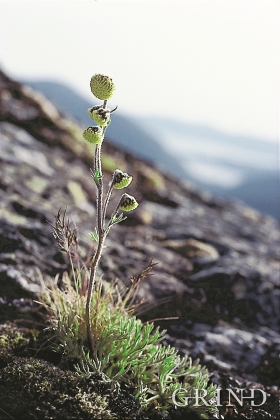 NORWEGIAN SAGEBRUSH – THE FIRST COLONIZER AFTER THE ICE AGE?

When high school student Arne Handegard collected plants for a herbarium in 1962, he didn’t know what kind of rarity he had pressed into his notebook. 30 years later he attended a botanical lecture, where a picture was shown of a plant he recognized: “Norwegian Sagebrush, which in Norway is only found in a large area of Dovre and in Trollheimen, and in a little area in Ry county”. Arne Handegard raised his hand: “That plant grows on Mt. Jonstein in Jondal”.

To begin with he was not believed – but the find was later confirmed by botanists. The Jonstein locality became a big sensation among scientists.

Norwegian sagebrush grows in only a few mountainous areas, which lie far apart. An interesting question is why it does not grow in the many other impoverished areas of the mountains that have similar vegetation to that on Jonstein?

We can best understand its distribution by looking into the history of Norwegian sagebrush. During the Ice Age, Norwegian sagebrush grew – possibly in large quantities – on the cold plains south of the glacier that covered Scandinavia. As the ice melted, the plant followed along, and colonized the fresh moraine soil. It may have migrated into West Norway from the North Sea, which at that time was dry land. When Norwegian sagebrush had taken root as part of the flora, there was still much ice in the fjord- and mountain areas in the county. As the climate warmed, it became unfavourable for the pioneer. Forest and other vegetation out-competed Norwegian sagebrush most places. But, Norwegian sagebrush did not die out completely. Jonstein may have become ice-free early, and the conditions there may have been especially good for the species. In which case Norwegian sagebrush has grown in the same locality for nearly 14 000 years.

Norwegian sagebrush doesn’t especially thrive on the barren landscape, between stones and gravel or in mats of wooly fringe moss. Sometimes relatively large amounts grow in a limited area. The thin leaves, down near the ground, nonetheless make it difficult to see. Few other plants grow such a straight stem. Small yellow flowers line the stalk. Every occurrence has its own history. How did the plant get to the site, and how long has it grown there? The distribution of Norwegian sagebrush, a gem amidst the flora, has been discussed by scientists far and wide. Some histories are more interesting than others…