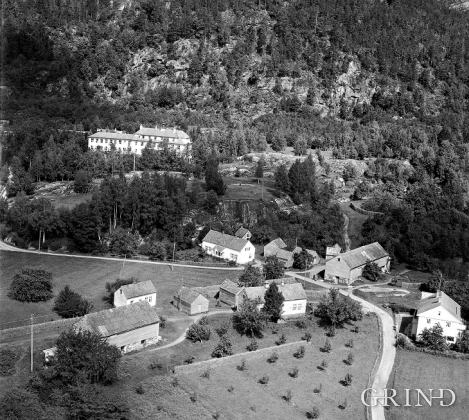 The farm Vik in Jondal has been one of the earliest settled farms in Jondal; a good and fertile farm east of the river. Legends hold that mighty men have lived in Vik, and it is easy to imagine that the farm may have been a chieftain’s seat for some time.

A letter from Jondal dated 3 May 1459, confirms that Sigurd Magnusson sells to his friend, Magnus Johnsson “half femta mamatabol jord i Wiik som liggr i Jonadal nordar firir aaen”. (A half fifth of land [that provided a monthly cost unit of butter and flour per month] in Wiik in Jondal north of the river).

Whether the “bigwig in Vik” belongs to legend or history is difficult to decide today. What we do know is that Johannes Lauritsson Vik (1620 – 1704), who was a country law representative in Jondal 1668-85, took over the farm as a young man and became a prosperous man. He bought most of the Munkeliv estate in Jondal and part of the Galtung estate. Around 1700 he also became the owner of Sålesnes. For many generations there have been law representatives on the Vik farm, and the farm provides us with a close-up of the farmer/law representative’s position and status, as the extended arm of the law in the local society. Parts of the well-built dwelling house are probably from the end of the 1700s, with door panels and mouldings in the baroques style; later on the house was slightly rebuilt in the middle of the 1800s, while the scullery/bake-house, which, according to records, clearly has been a smokehouse, is supposed to be from the 1600s. Perhaps this is the oldest dwelling house on the farm.